Our destination wedding in The Abacos was unforgettable, but not for the reasons you might expect. If you’ve found yourself on this page in search of Bahama Beach Club wedding reviews or information, start here with the whole story. After the wedding, we awaited a resolution but after not receiving any response from the hotel whatsoever, we wrote about it here on the site. And then all hell broke loose. You can read about the threats and defamation here.

And there’s even more:

The owner at Bahama Beach Club in Treasure Cay sure has a lot to say! 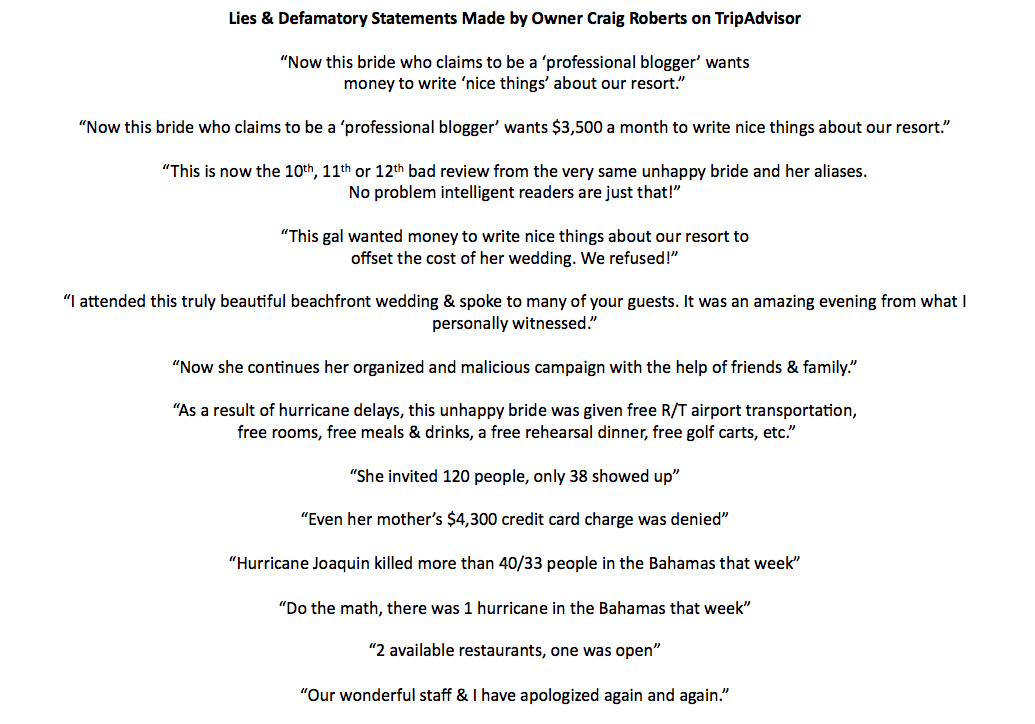 FACT: I have proof that construction at Bahama Beach Club started mid-September with an estimated completion date of the end of October. (In reality, the pool was not filled until the end of November.)

Hurricane Joaquin threatened The Bahamas from Oct. 1-3, making landfall over the Southern Bahamas. (Abaco is in the Northern Bahamas, roughly 300 miles away.)

Hurricane preparations may have caused a delay in the overall schedule but our vacation, which began Oct. 18 and was scheduled for more than 6 months, would’ve been ruined by the construction with or without the convenient excuse of a hurricane. To misappropriate the very real terror and grief that other families in The Bahamas experienced during Hurricane Joaquin to cover lies is unjustifiable.

Other hotels on Abaco that our guests visited that week were in perfect working order, with not so much as a palm branch out of place. Furthermore, our honeymoon the very next week took place on Exuma, an island much closer to where Hurricane Joaquin wreaked havoc, and even there, there was so little damage that The Bachelor was able to film during the same dates.

LIE: Hurricane Joaquin killed 33 (or 40 – depending on when you asked Craig) people in The Bahamas that week.

FACT: Unfortunately, Hurricane Joaquin sunk a container ship – El Faro – in the Southern Bahamas the first week of October. Its 33 passengers were lost. This tragedy took place 300 miles from Bahama Beach Club and had no effect on the resort’s construction. No other lives were lost in The Bahamas. 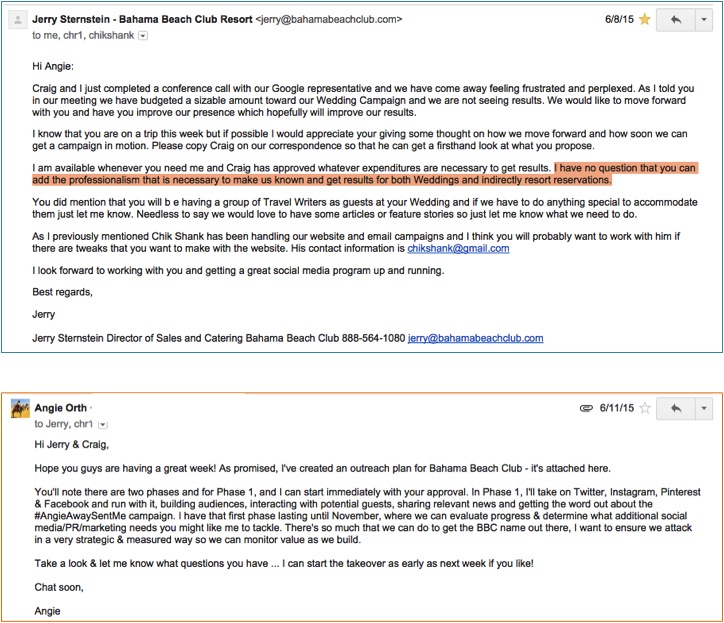 I asked for money by way of a partial refund for my guests’ hotel nights because they didn’t get the luxurious vacation they paid for due to the closed nature of the resort. Approximately $11,000 was spent on hotel rooms during the week. I didn’t ask for my wedding to be refunded as it did ultimately take place. The rehearsal dinner was refunded because it took place next to an empty pool.

With or without a refund, I wouldn’t have written nice things about the hotel. The Federal Trade Commission requires honesty in my reporting, and I abide by the law.

LIE: BBC’s SEO Expert Avdhesh Kumbhar says we shouldn’t have planned our wedding during off season, so it’s our fault that everything went wrong.

FACT: Knowing we were looking at dates in the off-season, we chose a hotel that did not close during September and October. Why would Bahama Beach Club accept our booking if the resort was going to be under construction? And now it’s our fault?

This is not the first time Jerry has lied about wedding dates.

FACT: We did not receive free rooms or discounts as a result of our wrecked week. All wedding couples receive free airport transportation. Yes, we did get the rehearsal dinner for free – a $1,700 refund because we had the privilege of welcoming our guests to The Bahamas next to an empty pool in the midst of a construction site.

And those golf carts? It was one cart to transfer 38 people to the marina, 3 times per day.

FACT: Another wedding couple experienced terrible service and lies just two months after our wedding, having to relocate their wedding the day before to another location. Afterward, the hotel would not assist in obtaining their marriage license as promised.

LIE: Craig Roberts has said publicly that I’m not a professional.

FACT: Bahama Beach Club and its management are well aware of my professionalism and resume. That’s why they requested to partner with me to publicize their wedding offerings and destination.

FACT: Thirty-eight people attended my wedding so there may well be 38 reviews by the time everyone has said their peace. I haven’t reached out to everyone encouraging reviews, on the contrary, per TripAdvisor policy, guests are required to write only about their own experiences. The folks who have written are angry that their expensive vacations were ruined.

LIE: Craig Roberts claims he personally enjoyed my wedding.
FACT: I have never met Craig Roberts. In the week of disaster, he never introduced himself or apologized. Not a single guest of mine saw him at our wedding or reception. When Rick and I tried to set a meeting with him the day after the wedding he could not because he was chauffeuring the other guests around on his boat. (A pre-emptive strike against bad reviews, perhaps?)

B. What that has to do with our wedding is anyone’s guess.

C. It’s illegal to discuss other customers’ financial transactions publicly. So, TripAdvisor is probably not the best place for that, Craig.

LIE: Craig says there were “2 available restaurants, one open.”
FACT: Where? If there was an open restaurant on property, then why the claim that we received all free meals?

LIE: “Our wonderful staff and I have apologized again and again.”
FACT: While several staff members apologized for the construction when their managers threw them under the bus and went into hiding, we have yet to receive an apology from Craig or Jerry. Unless you count the ones on TripAdvisor issued right after Craig berated us for not caring about all the people who died in Hurricane Joaquin.

It’s time to stop bullying me and my family, Craig Roberts.