Las Vegas is one of those destinations that’s constantly evolving. Since Rae & I first visited in 1999, when we were in Kindergarten and 12th grade respectively, dozens of towering hotels, gourmet restaurants and one-of-a-kind attractions have popped up on the neon landscape. There’s no dearth of entertainment, from headliners like Britney Spears to thrill rides to some of the most fascinating street performers (and regular people who are just kooky). I’m sure it would take a very long time to run out of shiny new things to see and do in Sin City, even if you visited often.

Even with all the evolution, remodeling, demolition and constant construction on The Strip, sometimes the magic of a place lies in its nostalgia – the who, what and why that made the where special to begin with. So, instead of rocketing from building-to-building on a high tech zipline or seeing a Cirque du Soleil show, Rae and I spent our last day of Vegas Bachelorette 2015 in town focusing on the more vintage side of Vegas.

We read some reviews & chose a Viator experience that you absolutely can’t get anywhere else – a Private Pink Cadillac Tour of Las Vegas with Elvis. You read that right.

Who better to show off Las Vegas than the King himself?

There are so many unique things to do in Las Vegas, it’s hard to choose. But this tour was a hell of a ride.

On tour day, this fabulous guy zipped up to the LINQ lobby and introduced himself… not that we could’ve confused him for any other tour guide. There’s only one guy in Vegas with a pink Cadillac, a white bedazzled jumpsuit and that peculiar black hair! Eddie Powers is one of Vegas’ most respected Elvis impersonators, appearing in many films and commercials over the years and conducting countless Elvis weddings in Vegas’ storied chapels.

Eddie, errr, Elvis, briefed us on the car – a ’56 Cadillac complete with white leather seats and touchy window handles. And sadly, no air conditioning.

It’s not every day that you get chauffeured to the iconic “Welcome to Fabulous Las Vegas” sign by the King of Rock and Roll, and the honks and stares from bystanders along remind you that you are indeed on one heck of a wild ride.

From the driver’s seat, Elvis serenaded us with a few classics while whacking the fuzzy dice on the rear view mirror. While it should be noted that my attempts to sing along & participate were on pitch, I confess most of what I was “singing” was unintelligible murmuring. As it turns out, I don’t know the words to a whole lot of Elvis songs. In fact, I didn’t know a whole lot about Elvis at all! (Now is probably a good time to mention that our collective knowledge of Elvis’ hits come from that one episode of New Girl and the Disney film, Lilo & Stitch. That is truly it.)

Upon arrival at the parking lot for the Fabulous Vegas sign, we were dismayed to see a long line of tourists, maybe 50 deep, queued up to take photos. It was well over 100 degrees and I thought for sure we were goners if we had to wait in that line, as Rae and I tend to be pretty heat-sensitive.

Elvis guided us past the queue of gaping tourists to the shady spot at the base of the sign, where he provided a Ziploc bag with fuzzy mirror dice, an autographed headshot of himself, plastic Elvis aviators, a photocopy of Elvis & Priscilla Presley’s marriage license and two canned margaritas. Then he turned us loose to shoot some sisterly selfies.

While we Snapchatted the longest Snap story you’ve ever seen (find me there: AngieAway), Elvis set up a mini-stage for a private concert – well, as private as it gets smack in front of a confused horde of staring tourists. 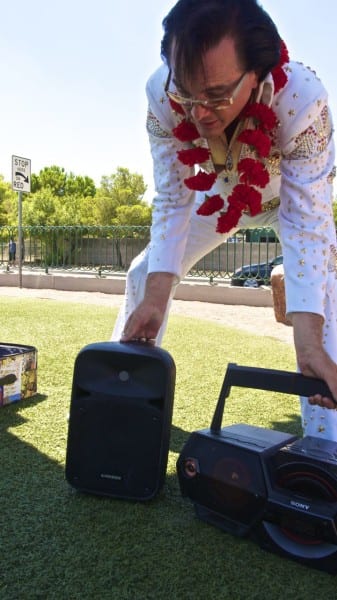 He set up one chair that Rae and I alternated sitting in, and proceeded to sing classics using his karaoke speaker setup.

Have you ever had a private concert? It can be uncomfortably intimate when there’s one person singing & dancing just for you while a bunch of other people gape.

Plus he was really going for it – this was the performance of a youthful, vigorous version of Elvis, before he got rich and old and sluggish.

There was kicking and punching and hip swiveling, the likes of which we haven’t seen since the King died in 1977.

Rachel and I did not quite know what to do with ourselves! (Aside from taking pictures, of course) 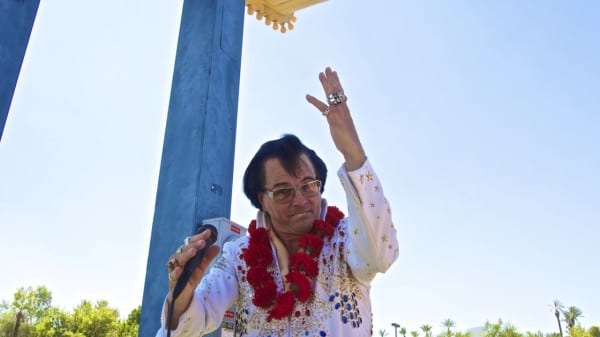 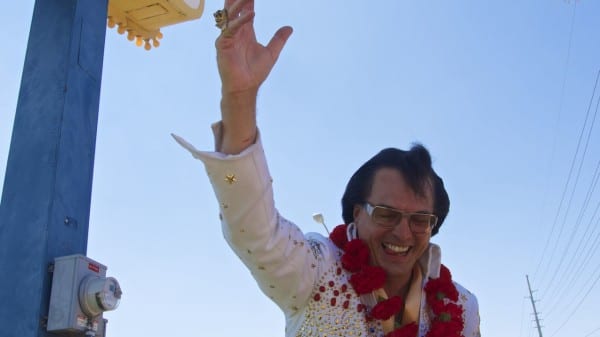 There are undoubtedly videos on YouTube, taken by the highly entertained line of tourists, of us looking bewildered (and sweaty) and Elvis enthusiastically getting down to the sounds of Jailhouse Rock.

I danced and sang along as best I could, but eventually the heat got the best of me and I had to plop on the grass and just watch Elvis kick it oldschool. How he managed that energy level in the face of such intense heat was the most fascinating part of the whole day!

Our pink time machine rolled on and the Vegas tour continued from inside the Caddy. We drove past the former Hilton where the real Elvis stayed when visiting in his heyday, as well as some of Vegas’ most famous (and infamous) wedding chapels, including the chapel where he married the love of his life, Priscilla. We learned more about Elvis Presley during this drive than you could ever imagine, something I hope will come in handy if I ever make my Jeopardy! dreams come true.

To enjoy this tour to the fullest, it helps to be a moderate-to-strong Elvis fan. The online reviews were effusive, and while we had a hilarious time, I still don’t know what to make of it! For me, it was way too darn hot to be driving around in a vehicle without A/C, so I think that sent me into a bit of a downward spiral after I finished frolicking under the Las Vegas sign.

Our lack of Elvis knowledge was pretty evident throughout the tour, which was more about Elvis factoids and less about Vegas history. Though we spent a good deal of the tour asking ourselves out loud, “What in the world are we doing here,” we sure did get a kick out of Eddie’s exuberance, and it’s one of those bizarre experiences we’ll never forget. 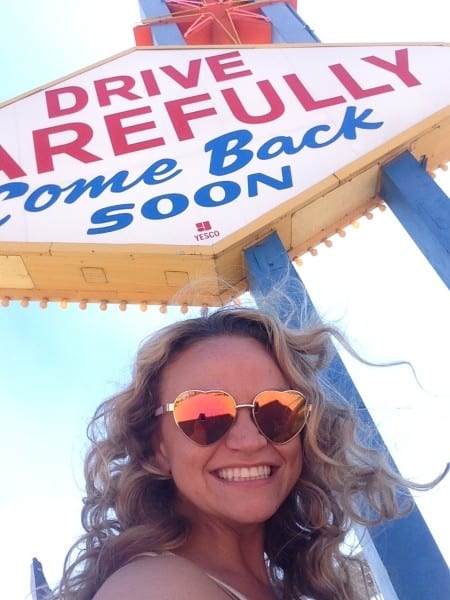 Though we didn’t know much about Elvis when we started the tour, by the end you could say we really couldn’t help falling in love with the King. We are certainly more familiar with his catalogue of hits and his personal history now, thanks to Eddie and his love for the subject matter. There’s nothing like a mess of black hair, a rhinestone jumpsuit and a pink Cadillac to immediately zap you back to a time when the Strip was less about swanky polished mega-resorts and more about classic headliners in smoky casinos.

If you’re a big Elvis fan, you will adore this tour! If you’re not, may I recommend drinking the canned margaritas?

What do you think? Is this type of tour right up your alley? Do you know all the words to Elvis’ hits or are you a mumbler like me?

Thanks to Viator for the opportunity to explore Las Vegas with Elvis. All opinions are my own.