I’ve had more than my fair share of girls’ weekends in over the past month, first on Bonaire and Aruba, then in Atlanta and finally in Vegas with my sister and Britney. With all this jaunting around I’ve hardly had time to post!

But I do have fun stories to tell, so let’s pick up with the adventures of Angie Away in Atlanta, my original post-college stomping grounds, where I drove up to spend a weekend with two of my dearest friends. Lauren, Jamie and I took on NYC at the same time and then eventually returned to our respective Southern hometowns – Jacksonville, Dallas and Atlanta — so basically the only time I see these two is when I schedule purposefully long layovers at ATL and DFW on the way to points beyond.

You can’t tell from the photo, but Jamie is due to have her first little one in October – YAY! But that also means she & her sweet hubby can’t make it to our Bahamas destination wedding. BOO!

So we figured what better way to celebrate all the good things going on than to meet up in Georgia for some quality friend time, some deadly delicious Southern food and a Pride & Prejudice marathon.

As far as relaxing girls’ weekends go, it doesn’t get much better than that.

Of course there’s so many things to do in Atlanta, so we did our fair share of exploring, too.

We stayed at the bright, modern Loews Atlanta in an enormous Grand Luxury suite with floor-to-ceiling windows overlooking the cityscape. The location is ideal for access to Midtown/Downtown and all the hippest Atlanta neighborhoods, and it’s really close to Piedmont Park, which we thought long and hard about visiting before instead choosing to eat candy and laze around the suite while catching up.

The Loews was a quick drive to Highland Bakery in the Old Fourth Ward where we had absolutely one of the most delicious brunch experiences of my life. We ordered the Sweet Potato Pancakes, Fried Chicken Benedict and Cilantro Corn Pancakes and I can’t just gush enough about the deliciousness.

Saturday night after laughing our heads off watching Trainwreck at the historic Plaza Movie Theater, we returned to our fancy weekend home and dined at Saltwood, Loews’ onsite charcuterie restaurant. I ate everything they put in front of me – except for the olives, of course. The local cheese tray was particularly yummy!

Just outside of Saltwood, the hotel lobby was always abuzz with activity, and I am pretty sure I saw at least two celebrities waiting on the valet. I also saw the valet bring around a car that retails for $250,000, followed by my ever-so-swanky Altima.

In addition to movie stars and rappers, the lobby seemed to always be chock full of wedding guests – most interestingly, groomsmen sporting just the color vest my future brother-in-law can’t seem to find at Men’s Warehouse. Jamie bravely attempted to buy an XL vest off the back of one of the guys, but it turned out to be the wrong style. BOO!

Speaking of the wedding, since I’m on a fitness kick at the moment, I spent a little time breaking a sweat before meeting up with the gals in the expansive 7th floor gym. I didn’t have time for any of the classes like Core Fusion Boot Camp, but fortunately I did fit in an hour massage at the Exhale Spa. It was one of the best hotel spa massages I’ve ever had! My masseuse worked out all the knots I’d developed driving 6 hours from Jacksonville to Atlanta, and boy did I need it. There are also steam rooms and saunas and personal training available. I’d move back to Atlanta for the gym & spa alone! 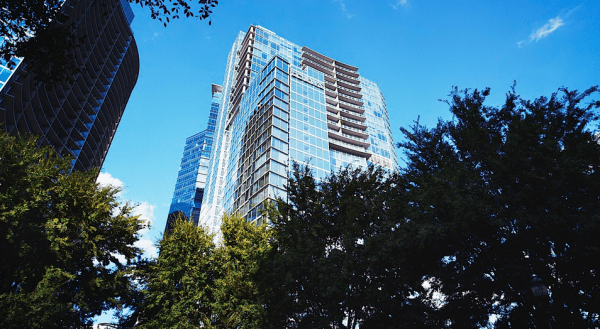 As far as property downsides, Loews is a trusted luxury brand, so to be honest there’s not much to complain about. WiFi is free, the Julien Farel professional hairdryer was one of the best I’ve ever encountered at a hotel and the service, including a concierge you can text during your stay, was really quite good.

My only frustration was the parking situation, which is either a pain to self park in the labyrinth-like garage or expensive to avoid. There’s little available street parking, and since I have a longstanding fear of parking garages (thanks in part to the time I crunched my little red Chevy Cavalier in my work garage back when I lived in Atlanta in 2004) I paid the exorbitant $34/day for valet.

When Jamie parked her car in the garage (still $24/day), we wandered around for at least 25 minutes trying to find an exit – not a huge deal when you’re among dear friends who find it hilarious, but I can imagine being really frustrated if I was alone or worse, if I really had to use the restroom! Parking in a big city is almost always the worst part, so even despite the confusing parking garage, the Loews Atlanta really comes out on top overall.

Where to Eat in Atlanta

Highland Bakery. Go for brunch and prepare to think about said brunch all day long after you’ve eaten it. You’ll want to go back the next day for a repeat session, so plan accordingly. Unbelievably good.

655 Highland Ave. NE + four other locations in the metro area

JCT. Run by one of the hottest chefs in Atlanta at the moment, JCT has a seasonal menu. I had the non-traditional but super flavorful chicken & dumplings. So, so good and in a beautiful space.

Jeni’s Splendid Ice Cream. The perfect stop after dinner at JCT! The line is always long but with flavors like Bourbon Salted Pecan & Brown Butter Almond Brittle, you won’t mind.

Thank you Loews Atlanta for hosting our little reunion weekend! All opinions are my own, obviously.

5 thoughts on “Where to Eat in Atlanta”