You’d think I’d get tired of the sites and sounds of London after more than half a dozen visits in the past few years, but I just can’t get enough. It’s such a dynamic place; I find each trip paints the city in a new light.

Last week’s trip happened to be painted in ethereal blue…

I’d always brushed off the London Eye as a touristy waste of time, but convinced by a colleague that it was worth checking out, we popped over to South Bank, paid £19.20 each for the standard ticket and boarded our spaceship-like vessel for the 30 minute orbit.

There was no line or wait to board at 7 p.m. on a Tuesday, and there were only two other passengers in our capsule, so we had space to spread out and take in the spectacular views of London at night.

Unbeknownst to us, our flight on the Eye took place just as the fireworks were beginning all over London in celebration of Bonfire Night/Guy Fawkes Night.  The sky lit up with color from no fewer than a dozen explosive pyrotechnic displays, anywhere from 1 – 20 miles away. Unfortunately, I didn’t have my fancy schmancy camera, and my iPhone didn’t do the best job of capturing the fireworks from all over the place… so in the absence of photos, you’ll just have to take my word for it this time. (And if you ever happen to be in London on November 5, the London Eye is an amazing spot for fireworks viewing!)

There’s nothing quite so exciting as accidentally being the right place at the right time, and that night, we certainly were.

From our circulating bubble on the Eye, we noticed a group gathered on Westminster Bridge below. Were they perhaps Bonfire Night revelers or a super fun, disco-dancing flash mob?

Nope. They were protesters, taking their rants to the streets on Guy Fawkes Night. (Click here for the BBC article on the protest.)

You know I just had to get a closer look at the situation, because yeah, potentially violent protests are the safest and most mom-approved places to hang out when traveling — and they make for excellent photos! 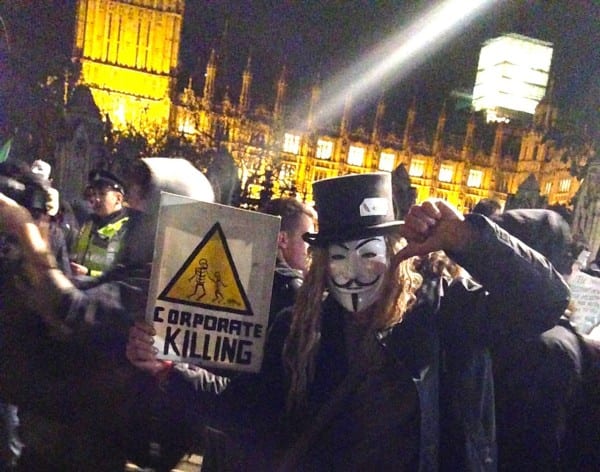 Until last week, I hadn’t heard of Guy Fawkes or Bonfire Night, so I had to do some quick iPhone research to figure out the correlation between the masks, Fawkes, V for Vendetta, the hacktivist group Anonymous and Russell Brand. Yes, apparently he was there, too.

Guy Fawkes was a revolutionary type who, with a group of other dissident Catholics, conspired to blow up Parliament & the reigning monarch in the failed Gunpowder Plot of 1605. Once he was tried, convicted and executed, people lit bonfires and burned effigies of Guy around the kingdom. More than 400 years later, they’re still doing it every Nov. 5, imploring each other to “remember, remember the 5th of November.”

(And another cool note: the term “guy” comes from this particular guy, Guy.)

Now, what about those masks?

Since the religious reasons behind the Gunpowder Plot are no longer the major social issues of the day, Guy Fawkes’ revolutionary ideology is reinvented every so often based on current events. The stylized masks that came to represent Fawkes were used as a plot point in the 2006 film V for Vendetta, and now they’re the recognized symbol for anti-government/anti-establishment groups like Anonymous and Occupy.

The masked group on Westminster Bridge grew in size and intensity, and we followed its migration toward Big Ben and Parliament Square, where a few thousand had congregated to protest.

The subject of the protesters’ rage seemed to vary from person to person – some ranted about the government, the monarchy, welfare, banks, poverty, healthcare, education and the general suckiness of the police (their words, not mine).

Somewhere in the fray, Russell Brand was spotted mouthing off about the evils of wealth — a bold position to take for a rich guy, right? — but I digress.

The one constant in the frothing crowd was the Guy Fawkes mask. 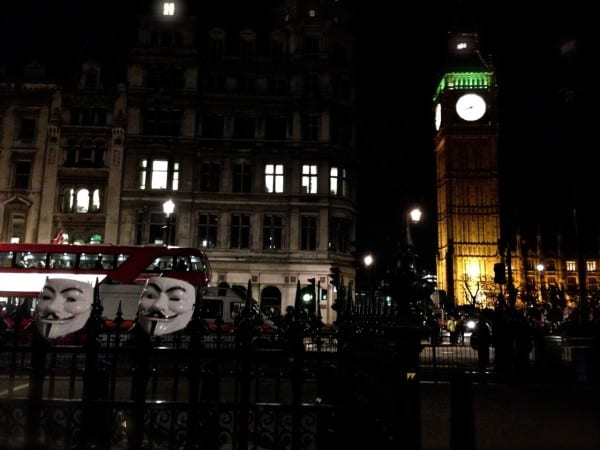 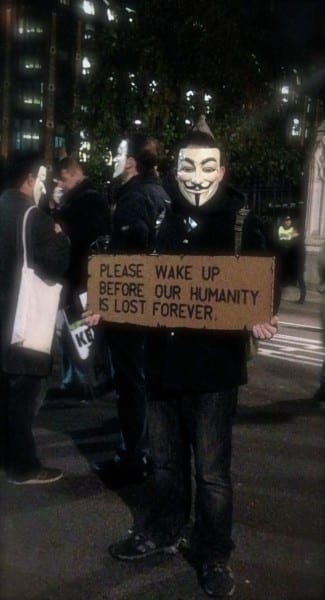 In the end, the protest was plenty peaceful and seemed like an excuse for rabble rousers to get drunk and yell funny English curse words at the police.

I left satisfied at stumbling into something unexpected with a historic tie-in and a culturally relevant twist.

London is one of those rare places that manages to be both modern and vividly connected to the past, and that’s just one more reason I think it’s one of the best cities in the world.