I just found out that there’s more to summer travel than Caribbean sunsets and stand-up paddle-boarding. To break up this year’s steamy tropical jaunts to the Dominican Republic, The Bahamas, Queensland and the Florida Keys, I hustled up to Alaska to celebrate the 50th wedding anniversary of two of my favorites – my grandparents Ernie & Darla.

They’re the Alaska veterans, having visited several years ago on a cruise. For their big anniversary, they wanted to see and do more, so they checked out some holiday deals, then planned a 2-week road, train and boat adventure that centered around visiting friends in Anchorage and seeing as many critters as possible.

All I had to do was pack a bag and a few cameras, and buckle up for the ride.

Alaska, in my mind, was meant to be like America’s Kenya – a safari adventure with copious bears, moose and humpback whales instead of the Big 5. Upon arrival, your eyes quickly become trained to watch for the slightest movement in the woods because there could be a caribou or wolf along any path or in any open field or drinking from any pristine, untouched pond.

Unfortunately, if you’ve been to Kenya, you might find Alaska’s safari experience to be somewhat less thrilling, as animal sightings are much further apart, often from much farther away. 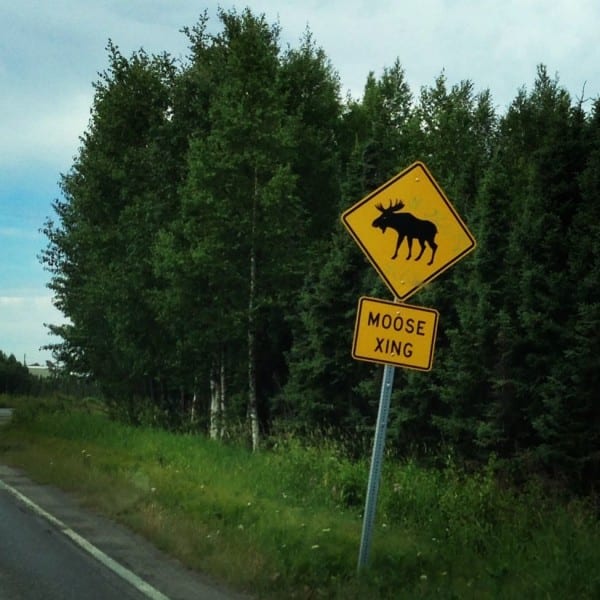 On the drizzliest, grayest, grossest of days, we took our scheduled tour into Denali National Park. Even when we were embedded miles and miles into the wilderness on an old green school bus with dozens of other travelers, we had few remarkable animal encounters. No creatures crossed the road in front of us, and the majority of those we saw on the journey were far, far in the distance, as you’ll see from my over-zoomed, super pixilated shots.

I hoped for more close encounters in the park.

As we drove into Denali, our ranger issued a serious warning about what to do if a bear showed up on a bathroom break. “Lock yourself in the toilet!” he said grimly.

During our 8-hour bus ride into the park, I didn’t dare tinkle without taking my camera, because I expected a grizzly bear to track me down at any moment, and somebody has got to Vine that stuff, you know?

I had no such luck.

We spotted a few moose, bears, some caribou and the famous Dall sheep from 15 miles away, but they could’ve been cardboard cutouts of sheep for all I could tell. (Wouldn’t that be the scam of all scams?) They were white dots on top of a hill. I came all the way to Alaska and I saw white dots on a hill.

Regardless of that day’s particular disappointments in both weather – we didn’t even glimpse Mt. McKinley – and in the animal department, it was still an adventure few people get to experience and for that I’m grateful. I listened to the Into the Wild soundtrack and enjoyed the vastness of the park and Eddie Vedder’s gravelly voice, vowing to come back again with more time, a better zoom lens and a tent. 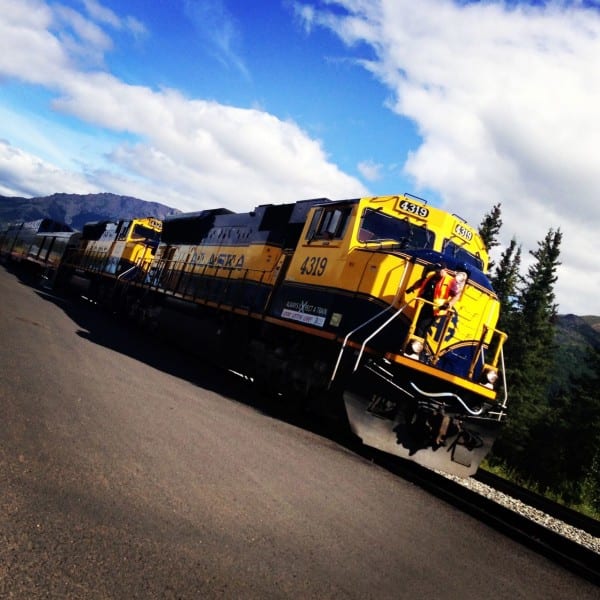 On the Alaska Railroad from Denali to Anchorage, I stared out the window for the better part of a day as millions of acres of virgin wilderness passed by.

I saw one eagle and a moose in a hundred bajillion miles of forest.

Where were all the critters?! If this was Kenya, I’d have safari fatigue by now. 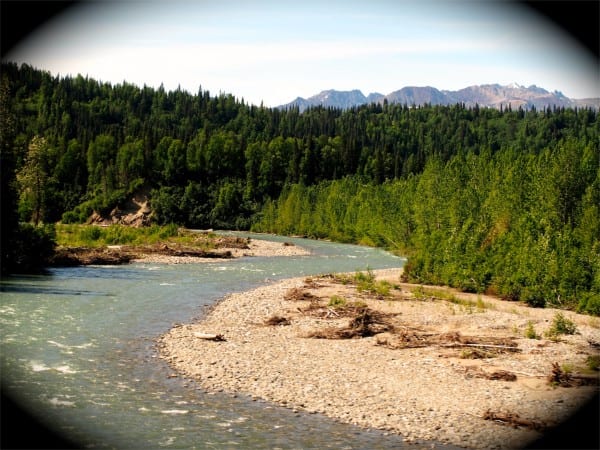 We left the world of hotels and lodges and national parks and safaris behind and stayed with new friends and their poodle posse in Anchorage. Staying up late and chatting on the patio for hours with our hosts was easy, because it never seemed to get dark. By the time you realized you were tired, it was after midnight and it still looked like dusk.

Since I’d pretty much given up on the close encounters I’d hoped for in Alaska, the events of the next few days took us all by surprise.

4 thoughts on “All the Critters in Alaska”