I met a hotelier in Nairobi during my RTW trip and we became fast friends. One day he said, “You know, there was this competition a couple years back for the Best Job in the World. You would’ve been a shoe-in for it!”

I laughed. Probably a little too maniacally. Little did he know… 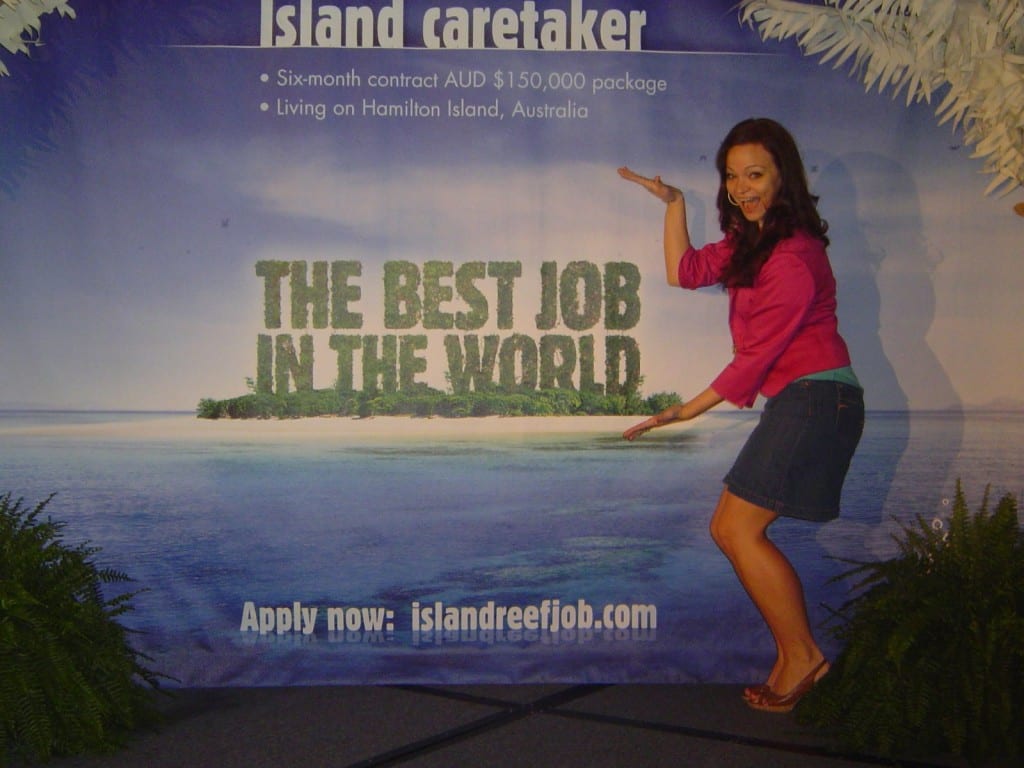 Four years ago, I was in the throes of one of the most intense, life-altering experiences of my life. At least since The Apprentice shenanigans of 2006…

In January of 2009, I received an email from a friend about Tourism Queensland’s Best Job in the World campaign. The note said, “I read this and thought of you – good luck!” I skimmed the article and immediately felt like I was on the verge of something big. Who wouldn’t want to live on an island on the Great Barrier Reef and get paid $100,000 to do it? I fit all the requirements to a tee.

I was giddy with anticipation – this.could.be.it.

I went all out for my video and somehow managed to convince my sweet NYC friends to assist – even if it meant standing outside the Today Show at 6:30 a.m. to get a quick word in with Matt Lauer and making a fool of myself in Times Square while sporting scuba gear & a pink trench coat on a 27 degree night.

I bought video editing software for my brand new Mac and learned as I went… something that turned out to be infinitely more difficult and time consuming than I expected. I threw welcome parties for other visiting finalists. While planning my video, something else notable came up – the US Airways crash on the Hudson River. That shouldn’t have been a huge deal for me (other than the fact I was on that very plane 7 days before) except I learned, moments after the crash, that my company would be managing PR efforts for the incident. (That wild story is going in my book, don’t you worry.) Minor speed bump.

Finally, after the plane crashes, parties, editing and other various obstacles were in the past, I finished my Best Job in the World video… and with 34,000 other hopefuls, waited to hear if I’d made the cut.

You know what happens next…. I made it!

I found out I’d been chosen as a top 50 finalist and screamed/danced/jumped/stared with wide-eyed wonder at my computer screen. Then I got to work, spending weeks behind the scenes promoting both myself and the Tourism Queensland campaign at large. (Side note: what a brilliant campaign, TQ! They ultimately populated YouTube with 34,000 60-second commercials about Australia/Queensland/The Great Barrier Reef and then had 50 rabid finalists doing free PR around the world for them for months. For about $1 million, they generated over $200 million in publicity. Diabolical and absolutely genius! I can’t tell you how many of my past and current PR consulting clients ask about how to do the next Best Job campaign!)

I nearly died of exhaustion on my whirlwind media tour. I did interviews with newspapers and magazines, chatted up flirty radio hosts on-air, had photo shoots in Times Square and spoke to TV crews. Toward the end of the effort, I flew to California to meet some of the finalists and Tourism Queensland representatives in the hopes of proving my worth. 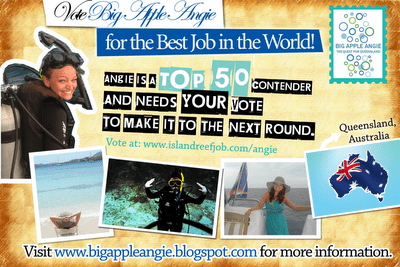 But it wasn’t meant to be.

As you may have already guessed, I didn’t make it past the top 50. I was disappointed of course, but my background in PR gave me perspective. Unless you’re on the inside, you really can’t know what exactly the judges were looking for. It could’ve had more to do with demographics than anything I did right or wrong, and there’s not a whole lot to be done about that.

Plus, TQ ultimately chose Ben, who has done a stellar job and continues working with Tourism Queensland today. They couldn’t have picked a person more suited for the task! 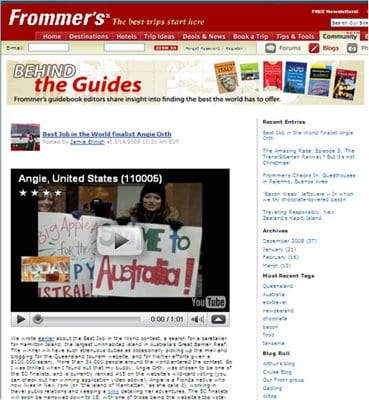 Reflecting on what the Best Job in the World experience meant to me brings back an instant rush of adrenaline. My muscle memory hasn’t forgotten what it felt like to be on pins and needles for weeks on end. It was such a harrowing time. I was so busy, so sleep deprived and so hopeful.

Here are a few lessons I learned from the process:

1. Don’t be afraid to dream big. My roommates at the time of all the BJITW madness were total jerks. As I was editing my video at the kitchen table one night after work, they asked why I would waste so much of my time trying out for something I’d never get. And I said – as I did with The Apprentice auditions in 2006 – Why not? Why not me? And I think those are the three most important words you can ask yourself when presented with a similar situation… WHY NOT ME?!

2. Anything worth having is gonna cost ya. It might cost time, it might cost money, it might cost wrinkles and gray hair and sanity. You might have to sleep in the treacherous Long Beach airport for two nights or invest money you don’t have into software and plane tickets. But if you want something badly enough, it’s worth going all out for.

3. The world is a tiny place. The best part of this Willy Wonka-like stunt is the remarkable connections I now have all around the world. While I didn’t end up with the caretaker job, I did get to share this once-in-a-lifetime journey with several folks I now consider dear friends. If I just stop to think about how my cup overfloweth with good people, it overwhelms me.

Every time I’m in London, I meet up with Holly (check out her debut novel Geek Girl that just came out last week!) & Sara. I just had sushi with Anny & Christine in NYC. Had a long chat with Steven from Texas a few weeks ago. And have met up with other finalists around the world and stayed in touch with others in the hopes of meeting them in the future. The single best part about the entire Best Job experience was being matched up with this group of like-minded, video-making folks.

4. You can’t always get what you want. But sometimes, you get what you need.*  I may not have become an ambassador for Tourism Queensland and I may not have $100,000 extra in my pocket, but I think making the top 50 was actually more beneficial to me from a long-term perspective than winning would’ve been.

I thought that getting the Best Job in the World would be the ultimate experience for me that I could parlay into a career of fulltime traveling and doing just exactly what I wanted. Yet even without winning, I took the lessons I learned, the connections I made and the newly acquired hutzpah to take me to the next step in my plan – leaving NYC and my awesome PR job for something even bigger: a solo trip around the globe.

Now four years later, I actually, really, truly have the best job in the world. I’m beholden to no one, I make my own schedule, I write all day long — and I’m able to see all of the world as I please, not just a corner of it.

Mick Jagger named me, so I feel ok borrowing his lyrics now and then to get a point across.

As you may have read in the news, Tourism Australia has a new campaign – a Best Job 2.0, if you will. While I probably won’t be trying out again – once was more than enough, methinks – if you have any desire at all to see Australia and work your butt off to get there, check it out. (If you make the finals, let me know and I’ll be happy to vote for you. I’m still completely awed by the friends, family and strangers who supported me during that crazy time!)

So what do you think? Are you going to try out for the latest Best Job in the World?