By the time you encounter those two words, chances are your travel experience is already stinking pretty badly.

In the past few weeks I’ve had to interact with the customer service reps at two large travel companies, and I wanted to share them both with you as a cautionary tale. Some companies remedy their situations with goodwill and good judgment; some fleece their customers for a quick buck. You might be surprised who did well and who just dropped the ball.

Recently I flew from Lihue, Hawaii, to Casablanca, Morocco, on American Airlines, and decided it would be the perfect opportunity to buy a 24-hour pass to the Admirals Club Lounge. According to the representative at the Admirals Club in LAX, for just $50, I’d have access to lounges in LA, New York and Madrid, where I could nap, shower, use free WiFi, eat tasty snacks and recharge my electronics on my journey to the other side of the world.

To my shock & horror, I was turned away at the desk. Apparently, the pass is not valid in Madrid. Only Iberia Hope Diamond Rockstar Elite Status people are allowed – Admirals Club pass or not.

I was livid. I’d been misinformed. I’d paid for something that I didn’t receive. And I was so ever-loving TIRED. To make matters worse, the Iberia woman at the desk was incredibly rude & dismissive.

I knew what I had to do…

Once I had access to WiFi (thank goodness for Boingo!), I tweeted my distress to AA and received a response immediately with a promise to look into the situation. As it turns out, I was misinformed by the staff in LAX. Madrid is not one of the places you can use the Admirals Club one day pass.

Ultimately American didn’t refund my $50, and they didn’t need to as I did use the lounges at LAX & JFK, but as a gesture of goodwill, they credited my account with some extra frequent flier miles. I was satisfied. They apologized for the misinformation, assured me the staff at LAX had been educated about what lounges were available, and showed a genuine concern that I’d had a bad experience.

I was in Kauai for 6 glorious weeks and during that time, I rented four different cars from three companies – Avis, National and Budget.* I returned each car on time, full of gas and empty of trash. Each time I was given the all clear that everything was in order and no additional charges would apply.

You can imagine my surprise when I returned home from my latest trip to Morocco to find a notice from Budget Rent a Car stating they were charging my credit card $75 for Excessive Sand / Dirt. 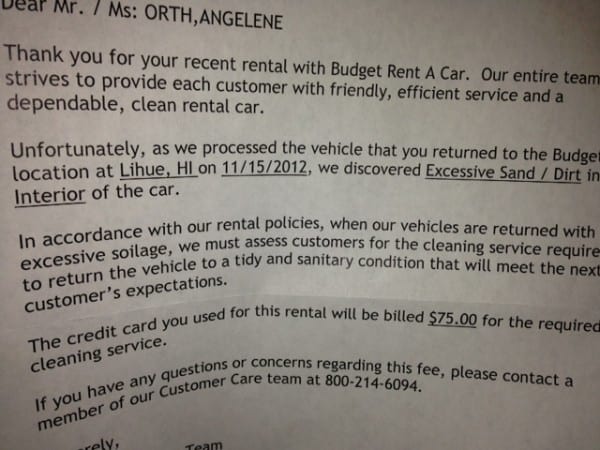 At the Budget terminal when I returned the car, I was told, “All clear. No charges.”

I tweeted my disappointment to @BudgetRAC and was directed to customer service, where I received this response:

Charges for cleaning vehicles that are returned in such poor condition that the vehicle must be sent out for detailing, will be charged in proportion to the level of cleaning that is needed. This includes, but is not limited to, vehicles returned with food stains on the seats, dog (or animal) hair that cannot be removed through normal vacuuming of the car, smoke odor, and cigarette burns.

Upon review we find that no adjustments are owed as the charges are valid. We regret that we are unable to offer a more favorable response at this time.

Ok. Not sure what dog hair and food stains have to do with my EXCESSIVE SAND, so I responded with further questions. And then this:

We regret failing to meet your expectations however the vehicle is expected to be returned in the same condition as it is received.  The Budget rental location may bill customers for any additional cleaning beyond what they consider normal.  These fees range up to $250.  The location has billed you $75 for having to clean the vehicle of the sand. The location took a number of pictures some of which are attached. 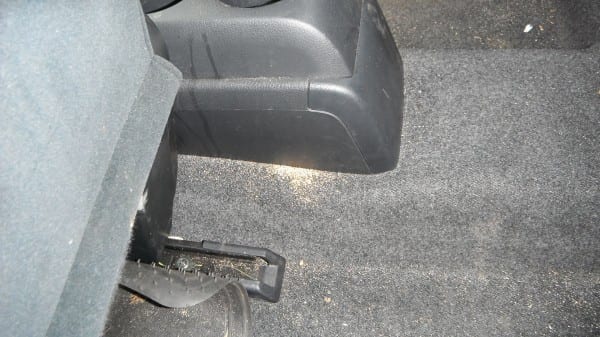 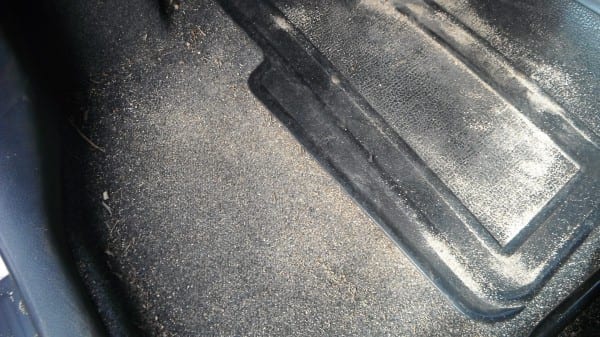 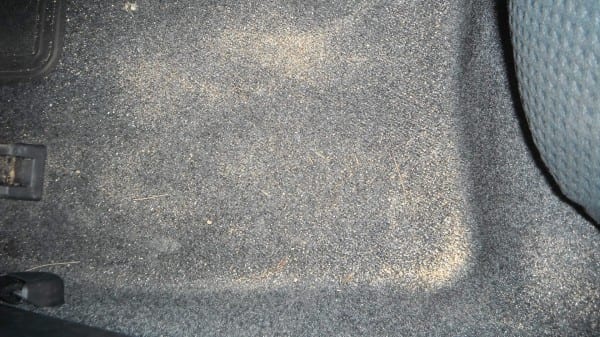 So there’s definitely some sand in the car… if, this is in fact, the same car I drove. But does it really look like enough to require Budget to send it off for $75 worth of detailing? Do rental car companies NOT vacuum cars before putting them back into rotation? If so… WHAT’S THE PROBLEM?

If there was an issue with the amount of sand, I should’ve been told about it at that moment so I could’ve remedied the situation by vacuuming it out myself for $1. Instead, I now have a $75 charge to eat right before Christmas. So that’s neat.

If anything is excessive here, I don’t think it’s the sand – I think it’s Budget’s fleecing of customers. Needless to say, American Airlines and I are still friends, and Budget Rent A Car won’t see another dime from this traveler.

Interestingly enough – the cars I rented from Avis & National were new, clean & dent-free. The two clunkers I rented from Budget were in embarrassingly poor shape, riddled with big dents, scratches and stains on the inside. Never have I felt compelled to take photographs of a car before driving it off the lot, but I recommend you ALWAYS do that. Now I know you can be billed a month later for damage, so it’s better safe than sorry!

Do you have a good or bad travel customer service story? I bet you do! Share it with me… maybe it’ll help me to feel better about wasting $75 on sand.