If we had the time to see every sight on our travel wishlist at varying times of day and night, how different would our perspectives be?

After spending an exhausting day walking, hiking and mule-riding around the bigger-than-you-can-imagine sites of Petra, I was beyond knackered. Petra by Night was on my itinerary for about 8:30 pm, but I was praying for rain. I couldn’t imagine walking in and out of the Siq all over again, especially in the February chill. That’s two more miles I just didn’t think I could take it.

But lucky for me, the rain stayed away and I got to experience a very different side of Petra… one I think any nomad would appreciate.

When we drove up to Petra’s main entrance for the second time that day, I expected Rami & Ibrahim to park the car and come with me — but they just dropped me at the corner and said they’d be back in a few hours.

So I was on my own to brave the Siq in the dark. Yipes.

At that moment, I felt like the experience could go one of two ways. Either it could be scary and terrifying and morbid if I thought of all the Nabatean bodies buried millenia ago in the ancient tombs enveloping me on all sides, OR it could be intriguing and reflective and unusual AND most importantly, closer to an Indiana Jones adventure than any I’d had so far.

I chose B. And I did not choose poorly.

I wandered the 1/4 mile to the Siq’s entrance in the midst of several dozen other travelers. At dusk, I couldn’t make out much, but it seemed as though I was the only solo traveler on the path. There were lots of couples snuggled up and a few families with younger kids. Interestingly, as we entered into the mouth of the Siq and its walls closed us in, the group dissipated until there were just a few people in my sight at any given time.

It was silent except for the occasional burst of laughter or the hushed whispers of a reverent group of travelers passing by. It grew darker and darker, until finally, I could scarcely see more than the candles lighting the way. The moon was full, though I couldn’t see it from within the Siq at that moment, and it cast a glow illuminating the top of the stones rising above me.

I walked blindly really, with no one to guide me and little more to entertain me than my own thoughts. (Oh, and I really had to tinkle. Like really bad. But there are no bathrooms along the way. So, if you ever want to hear a really funny & embarrassing story, take me out for dinner and I’ll tell you all about it!) 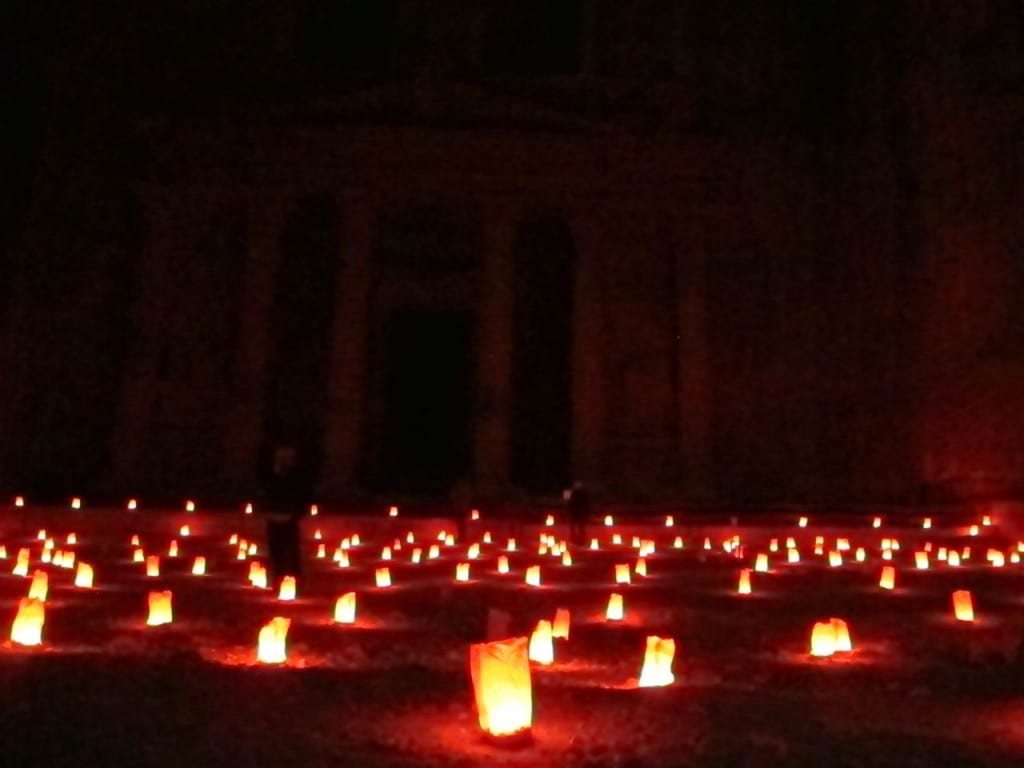 Finally I was emptied out at the end of the Siq in front of the Treasury, like earlier that morning. The same walk just 15 hours later was so different though! (One might say it was like day and night!)

There were no touts offering camel rides or souvenirs, just hundreds of candles illuminating the facade of Petra’s most famous landmark and Bedouin music floating from somewhere nearby. Bedouins offered mats to sit on and hot tea to stave off the cold. The crowd of 100, or maybe 200, spoke in whispers for the most part, collectively absorbing the peculiar sensation of bathing in the glow of the candle-lit Treasury.

The main event of Bedouin music served as a fitting soundtrack to a distinctive experience you can’t get anywhere else. I recorded it on my iPhone, so every once in a while I’ll listen to it when I need space & quiet, and it transforms me to that moment sitting cross-legged in the sand in front of the Treasury.

After it was over, I lingered, hoping to prolong the moment. Popping my headphones in for the walk back, I listened to a couple of my favorite instrumental tracks from the Chronicles of Narnia & Lord of the Rings and I must say, I never felt like more of an adventurer than I did then. That half hour of darkness and silence and peace and mystery in the Siq was one of my favorite moments in Jordan

Even solo, Petra by Night was well worth the extra trek.

Some closing thoughts on Petra. I worried about going there, thinking I’d already read so many posts on it that I’d already know all there was to know and it wouldn’t be worth the visit.

It’s bigger than I imagined. More impactful than expected. And certainly I’d consider returning to give it an even more in-depth look. I told my guide Wise Old King Solomon that if the Jordanian government would give me a shovel and a place to live, I’d be happy to live out my days excavating and searching for the next Treasury or Monastery.

Currently celebrating the 200th anniversary of rediscovery, now is a perfect time to visit Petra! Thanks to Visit Jordan for setting up my visit to Petra by Night.

Since I’m obviously no good at taking photos in the dark, please click through to see Deb & Dave’s shots from their experience with Petra by Night. The photos will take your breath away!

2 thoughts on “Adventuring in the Dark | Petra by Night”