“If I know a song of Africa, of the giraffe and the African new moon lying on her back, of the plows in the fields and the sweaty faces of the coffee pickers, does Africa know a song of me? Will the air over the plain quiver with a color that I have had on, or the children invent a game in which my name is, or the full moon throw a shadow over the gravel of the drive that was like me, or will the eagles of the Ngong Hills look out for me?” –Karen Blixen, Out of Africa 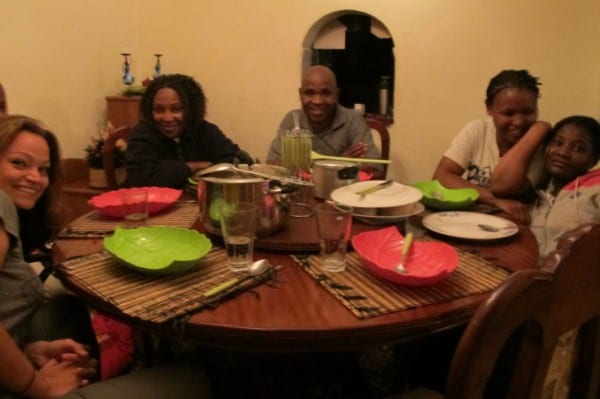 Family dinner in the Ngong Hills

Finding a Home in Kenya

Over the course of a lifetime of travels, I’ve stayed in 5-star hotels, in shabby, mildewed hostels that stunk of dirty feet, in tents in the woods, on sailboats on the Nile, on massive ships in the Mediterranean and on airport floors on nearly every continent. While each experience has its particular merits, I’ve found nothing ever quite compares on a cultural level to a home stay with a local family. Particularly memorable home visits included six weeks in Paris when I lived in a 13th arrondissement flat with a mom and her twenty-something daughter and in Bolivia where I stayed with a family of eight in their modest home in Santa Cruz.

Recently I spent three weeks in Kenya, including two nights at a luxe boutique hotel in Nairobi, two nights at a tented camp in the Masai Mara and the rest of the time with a boisterous, busy family in the Ngong Hills — the very same setting for Out of Africa, the beautiful novel & subsequent Streep/Redford flick that made the area famous. Today, the Ngong Hills are home to a wide spectrum of people living in both decrepit slums and affluent suburbs, driving on a pitted roadway with stunning vistas of the windmills atop the green hills.

I’m clearly not the only traveler interested in this type of accommodations, because many folks have asked me how I found this surrogate family. In early 2011, I was introduced via email by a friend-of-a-friend (and longtime blog reader) to Sammy, a Nairobi-based director for the Compassion organization, father of Melodie and Sereria and husband to Betty. I first learned of Compassion when traveling on short-term mission trips to Bolivia several years ago, and since 2005, I’ve sponsored a Bolivian girl through the organization.

Since I was young, Africa and its people have always been in my heart, so meeting Sammy was a true blessing on multiple levels. He put me in touch with a Compassion center near his house where I could work with kids and an organization I’m already so proud to support, and he invited me to spend my time in Kenya living with his family. 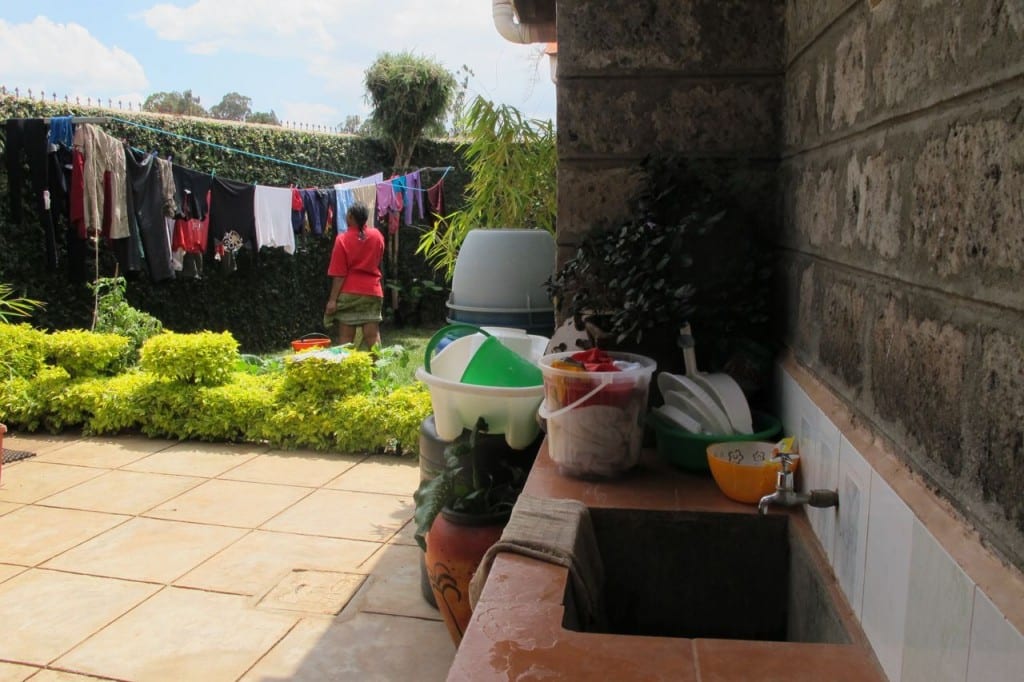 My flight from Cairo arrived at a ridiculous 3 a.m. and a pre-arranged car arrived to take me to Ngong Hills. I didn’t know what sort of house Sammy’s family lived in or really what was in store for me there, but I’d been desperately seeking a volunteer opportunity all year, and Sammy was the key, so I tucked away any anxiety and went for it. It was a relief when Betty met me at the gate and welcomed me into their house with my own room, desk and the piece-de-resistance: a functioning, if painfully slow, Internet connection. And there was already a picture of my family on the fridge to make me feel right at home. 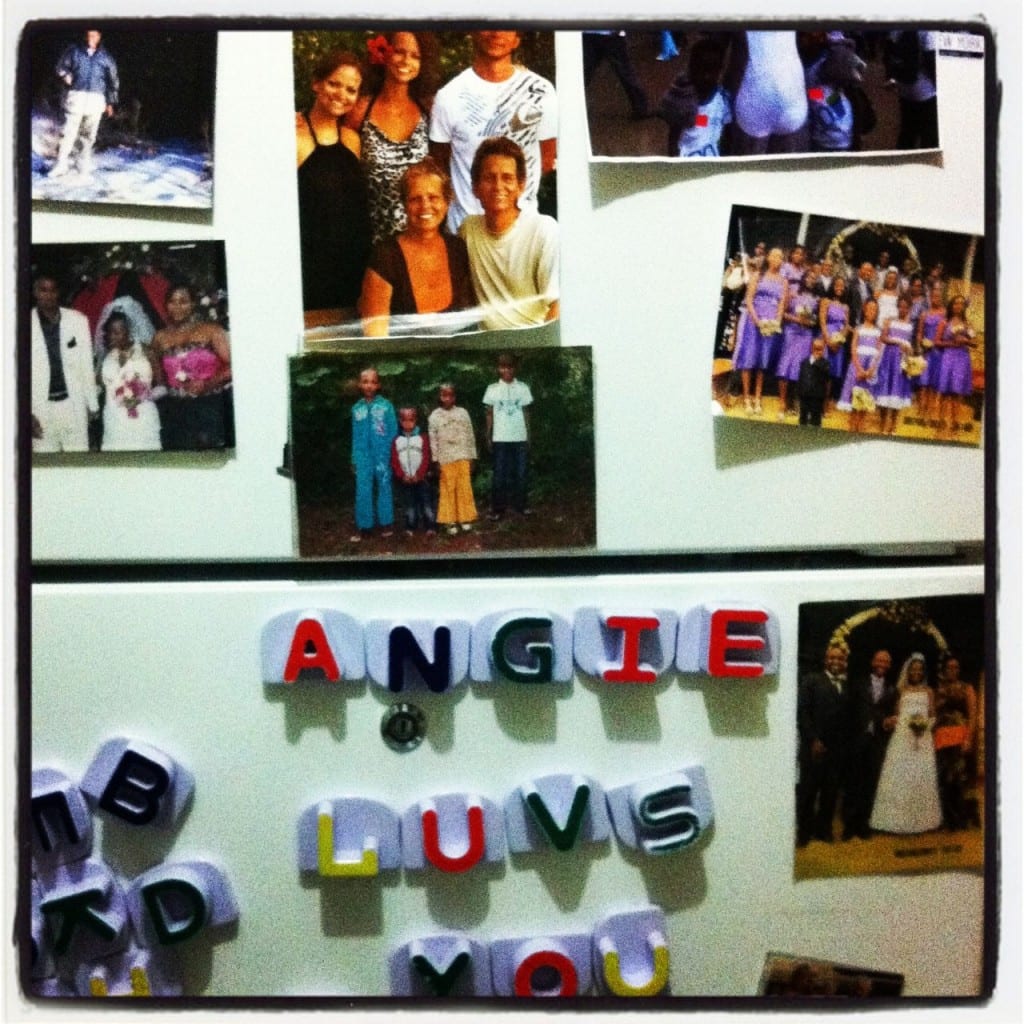 My family on the Kaunga’s fridge

I immediately bonded with Melodie, 10, and the two 19-year-old house helpers Jane and Sharon, and they became my sidekicks and constant companions during my stay. Sereria, 5, was a tougher nut to crack, but he opened up a bit following my distribution of gifts from the US – stickers, T-shirts, candy and a remote controlled car my mom and I picked out just for him.

When I first met all the kids, I noticed them exchanging confused glances. Turns out, based on the photo I emailed Sammy of my family, they assumed it was my little (yet much taller) sister who’d be arriving at their house. They laughed about that one for a week and made me promise to bring Rachel and the rest of the family along the next time I visited.

The majority of Kenyan cuisine consists of local staples – corn, potatoes and beans. Dishes like ugali, a traditional East African dish made of cornmeal and water, chapati and uji, were served along with mashed potatoes and beans, rice, etc. It’s a very starch-focused menu! 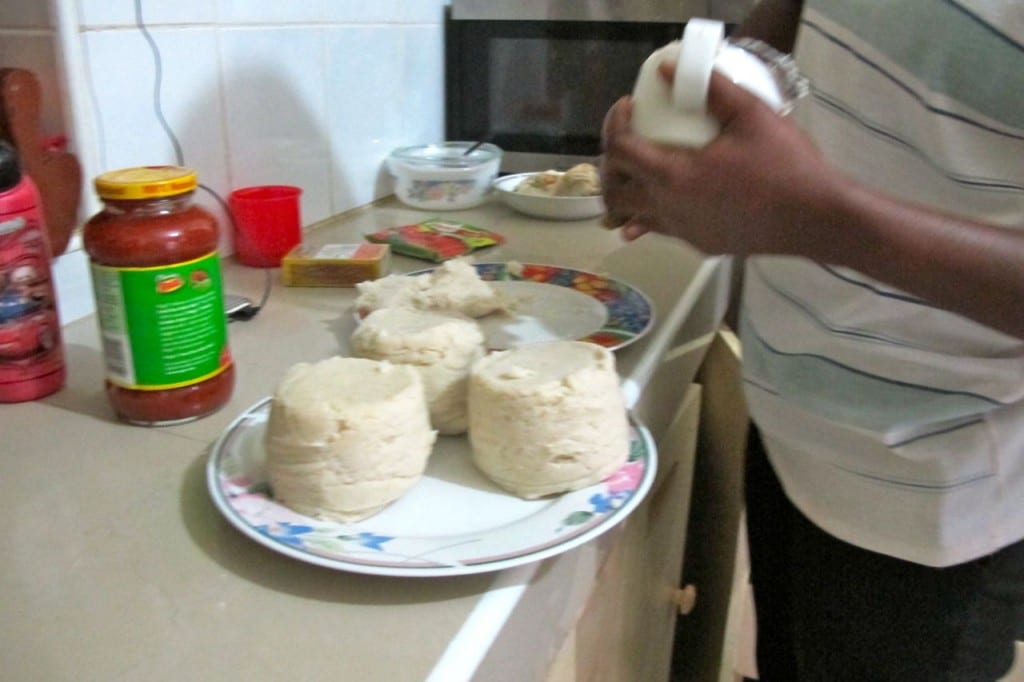 To thank them for their generosity in hosting me for two weeks, I offered to cook dinner my last night in the Ngong Hills. After observing the family’s eating habits for a few weeks, I knew they liked carrots, ground beef and anything stew-like, so I whipped up my Great Gram’s famous carrot chili recipe. Jane and Sharon seemed to be the pickiest eaters, so they slyly cooked ugali and other staples just in case my food was inedible. Ultimately, Sammy, Betty, Sereria and Melodie ate multiple helpings, but Jane and Sharon, while chewing small bites ever-so-politely, would rather have been eating beans and rice than my Great Gram’s most amazing concoction.

I experienced more of the authentic Kenya in those two weeks with the Kaungas than I could have in any other way. I lived in their home, ate their traditional dishes, attended their church, socialized with their friends and family, shopped in their markets and walked Sereria to school in their neighborhood. I was their special mzungo for those few days, treated as a guest of honor, a friend and a family member.

But my time in the Ngong Hills wasn’t all culture and kumbaya. As much fun as it was hanging with the Kaungas and doing normal, day-to-day activities, it wouldn’t be an Angie Away adventure without a couple of unbelievable tales thrown into the mix. So stay tuned!

Up next… Part 2: The Near-Death Experiences

15 thoughts on “Living with a Family in the Ngong Hills, Nairobi”