The big day arrived and the moment was almost upon us! I was giddy for the Running of the Bulls to start, partially because I’d waited all my life to see it but also because I’d been precariously balanced on top of a narrow, uncomfortable fence rail for two hours and my tush hurt something fierce. With that in mind, you’ll understand why I was only slightly disappointed that the whole shebang lasted an anticlimactic three minutes. 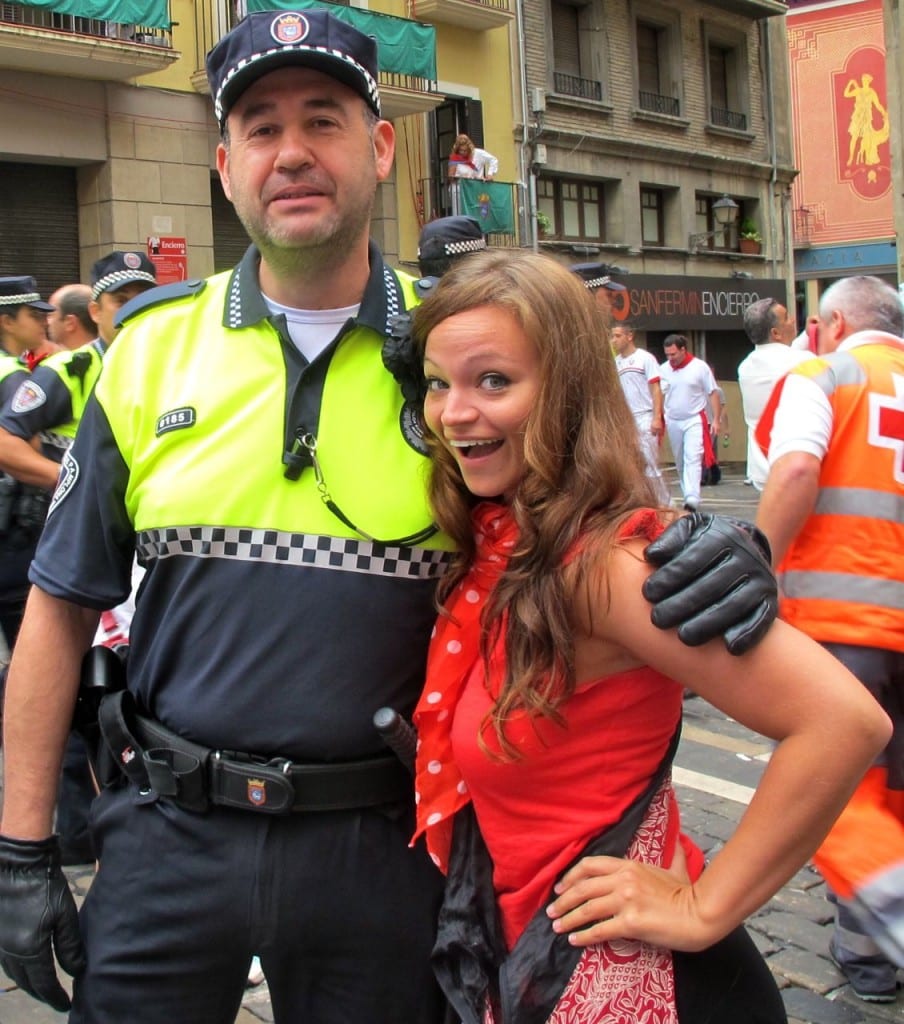 Runners and spectators congregate early at different sections along the 826 meter track, and police ensure everyone is “safely” either inside or outside the fence before start time. Jen & I ended up watching at the mid-point of the race at Plaza Consistorial, or Town Hall Square. I balanced on top of my fence, holding on with one foot, trying not to kick Jen in the face with the other foot, and video recording with my iPhone in one hand while snapping pics on the Canon G12 with the other hand. Moments before the bulls are released, the rules are read over a loudspeaker in Spanish, Basque & English. The different reactions from the runners are priceless. There’s everything from white-faced fear to ignorant delight on the mostly male crowd.

1. Participants must be at least 18 years old

2. Participants must run in the same direction as the bulls

3. Participants must not incite the bulls

4. Participants must not be under the influence of alcohol. (Um, yeah right. Take a big whiff. That’s sangria on at least 50 percent of the crowds’ breath!)

At 8 a.m. a rocket is fired to signal that the corral door is open and the bulls could start at any moment. A second rocket is fired once all six bulls and six steers have been released and are on the move. That’s right. Twelve really big, really mad creatures are on the loose in the center of town.

And then everybody goes B-A-N-A-N-A-S.

Getting the heck out of dodge

Immediately after the first rocket and before I ever saw the bulls, the crowd in front of Plaza Consistorial parted with many of the runners absolutely losing their minds in a frantic bid to escape the confines of the fence. 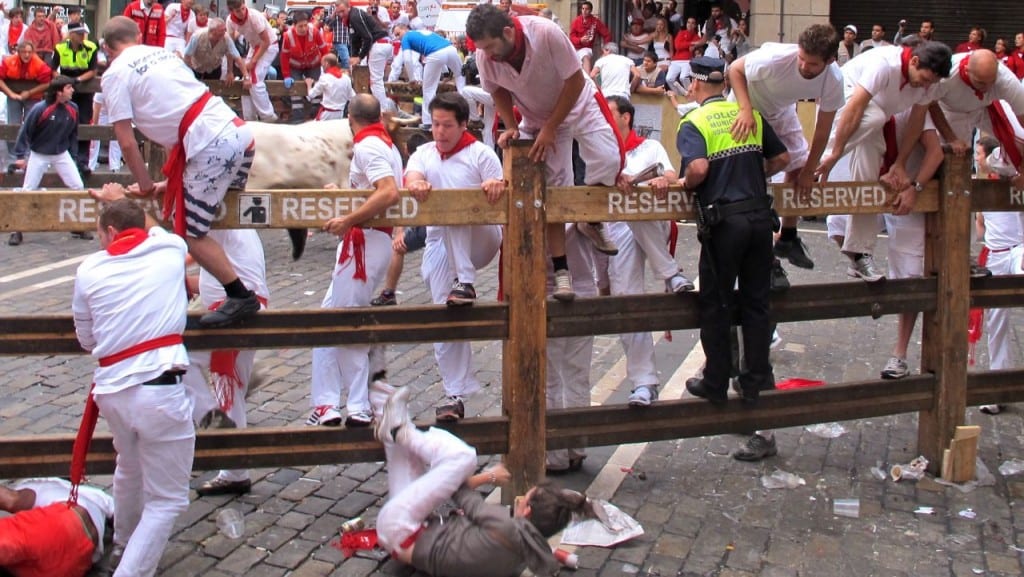 I suppose if I’d had furious horned creatures chasing me down the street before I’d had my latte, I’d have bailed, too, though statistically it’s not as dangerous as you might think. In seven days of bull running each year during the Festival of San Fermin, only about 200 to 300 runners are injured out of thousands and thousands, and most of those aren’t serious. Since 1910, 15 runners have been killed, a pretty low number considering how frightening it is to run with thousands of wasted dudes… err, I mean, giant bulls. For whatever reason, opening day is usually the one with the highest injuries, but this year only a handful of guys went to the hospital. Day 2 was a different story…

After all the bulls and steers and runners had passed, a majority of the escapees hopped back over the fence… why, I have no idea. I guess they wanted their friends to find them inside, not cowering in the fetal position next to a paramedic outside. That day, the unthinkable happened and one of the steers decided to turn around and run back the other way. So, we got a little 2-for-1 action, which I’m told never ever happens.

I have never seen anything so crazed as the leaping, nearly flying, men just in front of me that July morning. It appears to me that a huge percentage of guys who “ran with the bulls” that day were no closer than I was, having all jumped outside of the fence before the first bull even came into sight. Let’s check the footage:

What do you think? Would you ever run with the bulls in Pamplona?

12 thoughts on “Pamplona’s Running Of The Bulls”