I reached for my iPhone to switch off the alarm at 5 a.m. The rustling of Jen’s duvet cover as she woke up was the only sound in the hotel. I opened the window overlooking the sleeping village of Salinas. There was no movement. No cars whizzed by, no dogs barked and even the roosters were still silent. The stars hung in the black sky, and the crisp air chilled our stuffy room. You’d never know there were hundreds if not thousands of men (and a few women) in the area just waking up to the dawn of one of the most exhilarating and dangerous days of their lives.

The calm vanished as we scrambled to get dressed. In half an hour, our pre-booked taxis would arrive to take Jen & me & our four new friends at the hotel from the stillness of the Spanish countryside to Pamplona for one of the world’s wildest and most watched events – the Running of the Bulls. 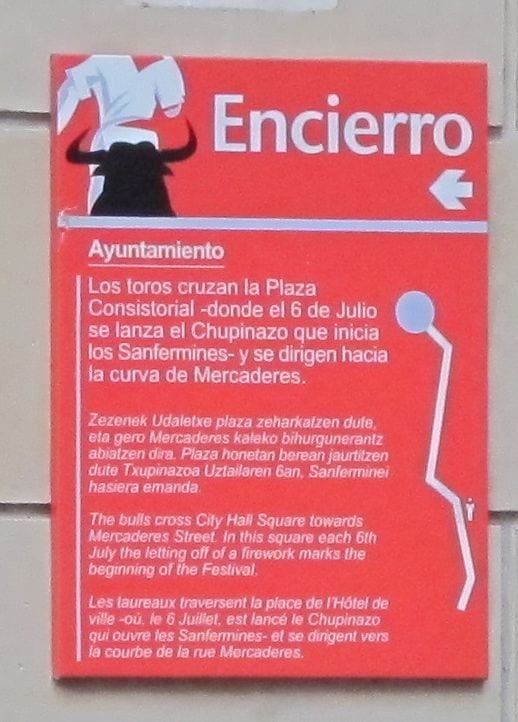 As cheesy as having a bucket list might be, this event has always been on mine. Maybe you’ve seen the spectacle on TV, or like me, perhaps you read Hemingway’s The Sun Also Rises

, a glance at what the Festival of San Fermin was like almost 100 years ago. (The event has grown exponentially since Ernie immortalized it in 1925, but interestingly, getting rip roaring wasted is still part of the festivities today.)

The festival is about much more than the Running of the Bulls, or encierro, but that is definitely the biggest draw. Daily bullfights, parades, fireworks and outright shenanigans are also on the schedule. 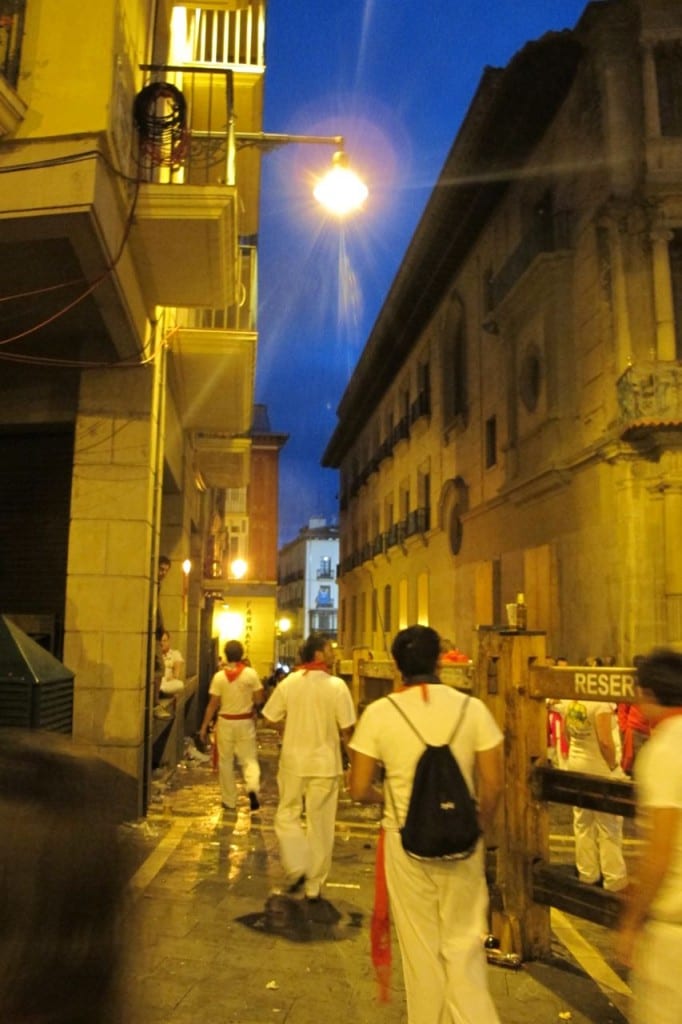 We arrived in Pamplona before sunrise to scout the perfect spot to watch the very first day of the encierro. Red-and-white-clad runners converged on the town, which was littered with broken glass and empty sangria bottles and smelled like Bourbon Street the day after Mardi Gras. 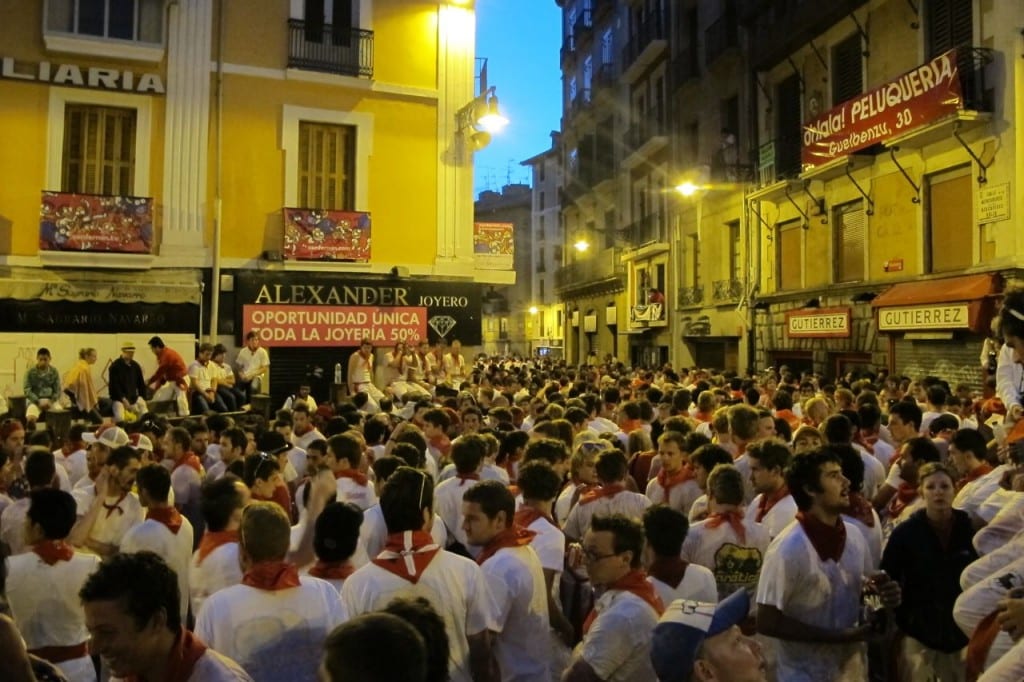 Runners meeting up at about 6:30 a.m. the morning of the first encierro 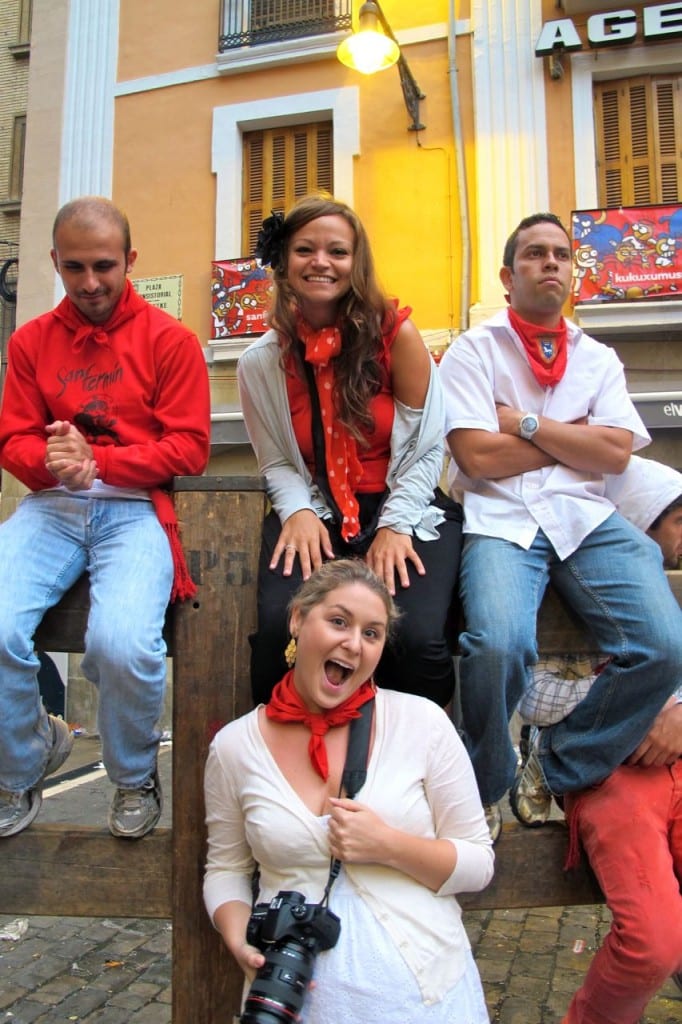 In Pamplona, a double wooden fence is used as a barrier and spectators are able to sit on the second fence if they can snag a seat early enough. (Yay, we did!) It wasn’t terribly comfortable sitting up there for two hours, and it wasn’t even that great of a view once the bulls ran by, but short of paying $200 for a balcony spot, it was probably the best option. 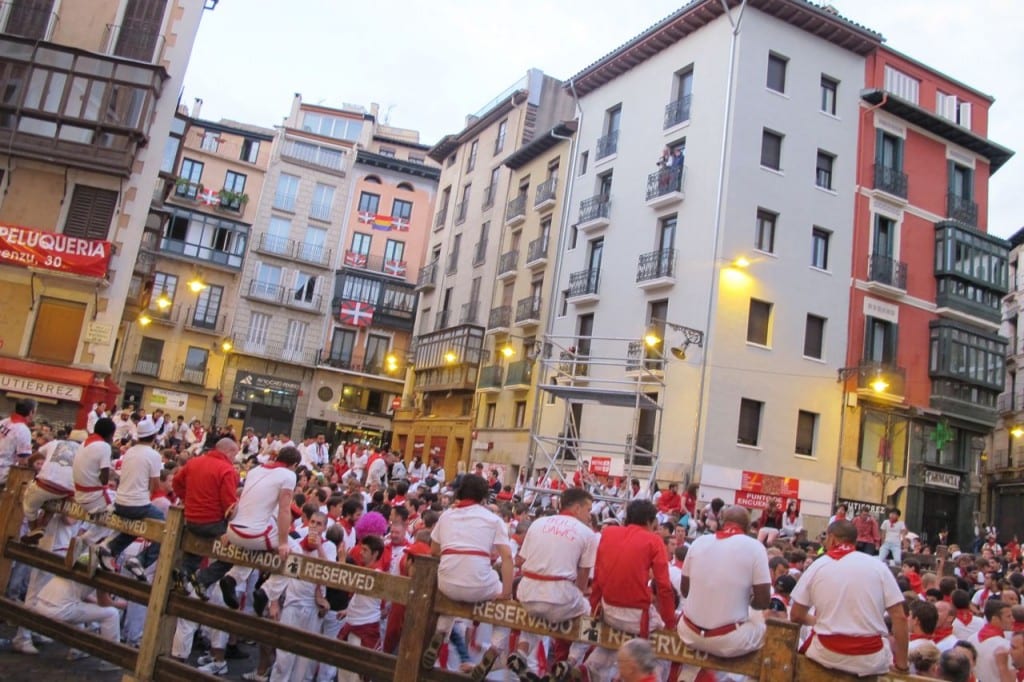 Runners preparing for the event

Like a baseball team or football roster, the local newspaper prints the stats for the bulls in the race each day. Weight & species are listed under photos of the bulls. I don’t know what difference it makes in the end, because I can tell you if I was running, I wouldn’t give a hoot if the bulls had brown spots or black. I would just be RUNNING.QUICKLY.AWAY.FROM.THEM. 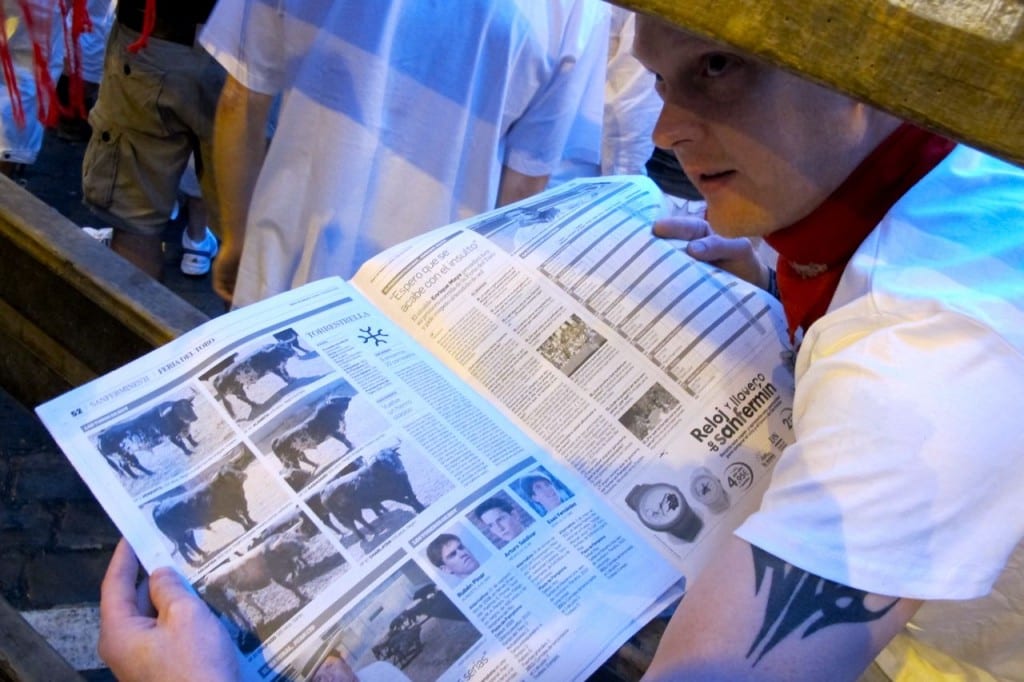 Some runners roll this paper up and use it to get the bull’s attention along the route.

If I had it to do over again, I would probably run. I was told girls aren’t allowed to participate, but there were a handful out there doing it and I would like to get in on that action next time. The rules also state you must not be under the influence of alcohol, but I guarantee 50 percent of those crazy fratty boys were three sheets to the wind & may have missed the bulls entirely due to blurred vision.

If I don’t run the next time, I will definitely reserve a balcony. Yes, it’s expensive, but the photos are about 10,000 times better from above than what Jen & I got balancing on a fence.

Up next: The Running of the Bulls!

6 thoughts on “Morning in Pamplona”