That Time I Almost Gave Up On RTW Travel

I didn’t go to sleep after karaoke in Vientiane because we didn’t get back in our local-filled, overstuffed tuk-tuk until around 4 a.m. and I was leaving for the airport to catch my flight to Phuket at 5 anyway. When I started to feel sick to my stomach, I chalked it up to exhaustion and the McDonald’s I ate during my layover in Bangkok. After eating unprocessed foods for so long, Western-style food is a real terror to the digestive system, something I found out the hard way after a Red Lobster visit during my last trip home. (Or maybe that happens every time you go to Red Lobster?) Something told me my intermittent stomach cramps were not the usual food sensitivities…

Travel days suck anyways, and this one was exacerbated by painful contractions every 20 minutes or so. It took a taxi, two planes, another taxi to the harbor and a 45-minute boat ride to get me to very remote Koh Yao, an island cluster between Phuket and Krabi. The main islands are Koh Yao Noi and Ko Yao Yai, so, the big one and the small one. I snapped a few pictures of the limestone karsts and jade water on the way to the resort, but had to put my camera down and curl up in the fetal position as the waves of pain came.

I’d arrived in paradise and was miserable, but I expected to feel better in no time. I rarely take medicine when I’m sick because most illnesses pass in a couple of days, but in the meantime, I couldn’t swim or eat or go diving or check out the surrounding islands — I was not happy about it. I didn’t come all this way to agonize in bed, though I was consoled by the idea that at least I was losing weight.

The requisite couple of days passed and the pain was still so intense that I considered going to the hospital, which I usually avoid at all costs. What’s that you say? There is no hospital? How about a competent local doctor? Nope.

My health (now a life or death matter, according to Mom who I swear I could hear yelling at me from the other side of the planet) would just have to wait until I went back to Phuket, 11 days later. I was again consoled by the idea that I could get some elective surgery while in the hospital there, as Phuket is known for medical tourism. Perhaps some Botox or boobs to go with my stomach repairs? Let me check my travel insurance policy…

Ultimately, I spent every single day on Koh Yao writhing in bed as the stomach contractions and cramps came, eating maybe one small meal a day, usually Tom Kah soup, and wondering what the heck was wrong with me. To be honest, I still don’t know. I checked WebMD and found out I could have salmonella, Crohn’s, a vampire-werewolf baby clawing its way out of me or perhaps a parasite. (Hopefully a cute little one with a fun cartoon voice who maybe just got carried away tap dancing in my intestines or something. Not a big scary multi-legged monstrosity straight out of Men in Black.)

It wouldn’t surprise me if I picked up something nasty in Laos. After all, I wandered around the streets Luang Prabang for hours barefoot, probably swallowed buckets of questionable gutter water during the New Year’s celebrations and played volleyball in a nasty mud pit in Vang Vieng. I kinda had it coming, if you think about it.

I admit that during the worst moments of pain, I reconsidered long term solo travel and had big doubts about traveling alone. With no one around to help or take me to the hospital if things got really bad, I had only hotel maids to count on if I took a turn for the worse. I was helpless and hurting and really cranky.

The day I took the boat back to Phuket, I miraculously was healed – so thanks to everyone who prayed for me! After eleven days of pain in Koh Yao, suddenly every symptom disappeared and I was back to my normal self. I even took a Muay Thai boxing class and went stand-up paddle boarding the next day. I still have no idea what I was sick with – I’m just glad it’s over.

Have you been sick while traveling? Ever had to go to a hospital in another country? Does Red Lobster make you feel like crap even if you haven’t been eating organic food for 2 months?

Up next… Where to stay in Koh Yao

Reflections From The Road | Vol. 3
Where to Stay | Koh Yao, Thailand
SHARE AWAY
JUMP TO COMMENTS

Where to Stay | Nairobi, Kenya 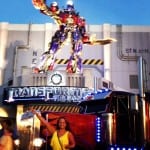 Spielberg, Transformers & The Day My Car was (sort of) Stolen