As physically and mentally rewarding as my time in Ubud had been, it was also really intense. I needed a change of pace… some lighthearted, girlie fun… some challenge to distract me. So how about more yoga and … surfing in Seminyak?

The next stop on my schedule was a stint at the Surf Goddess Retreat in Seminyak. And did it ever deliver on expectations! 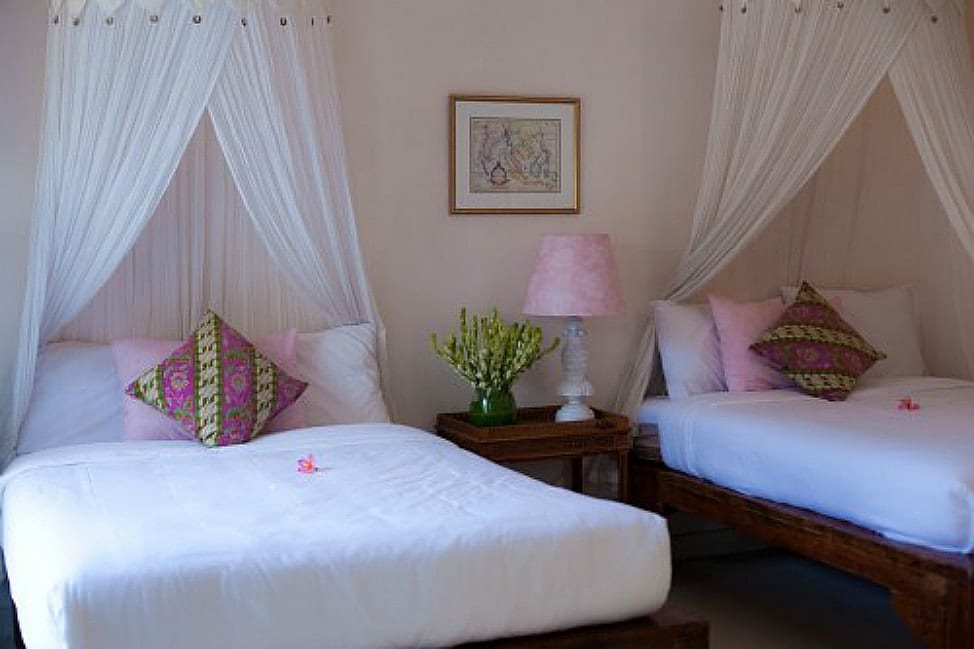 At this point, Pam & I were attached at the hip, so we decided to share accommodations at Villa Serena, where all the non-surfing activities happen at the Surf Goddess Retreat. When we first arrived, we found goodies awaiting us – a Surf Goddess beach bag, rash guard and pink sarong. I could already tell it was going to rock, and we were all going to match while rocking. 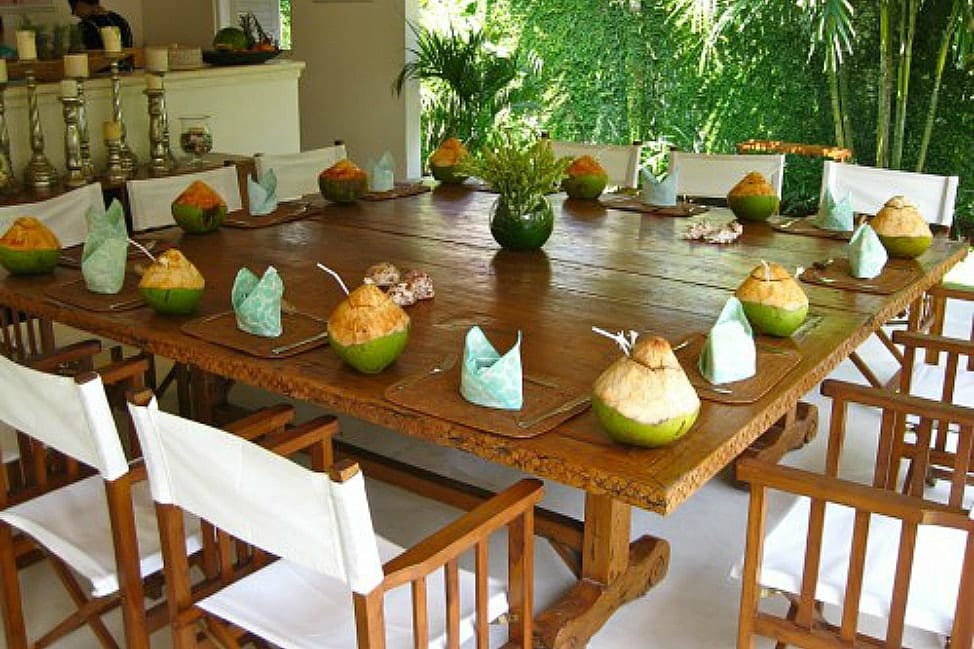 At Villa Serena in Seminyak, there are only a handful of rooms framing a central courtyard with a pool and a yoga pavilion conveniently located at the bottom of the stairs to my room. Everything is decorated exactly as I would have done it… beachy blues and greens, shell and coral accents and lots of crisp, fresh white curtains, mosquito nets and linens. There was also a massive bathtub in our powder room for soaking in case of muscle meltdown, which was highly possible given the workouts we were about to undertake. Pam & I immediately started planning to emulate the décor if we ever open our own hotel.

There’s a peacefulness about it that makes you want to move in indefinitely and write a book. 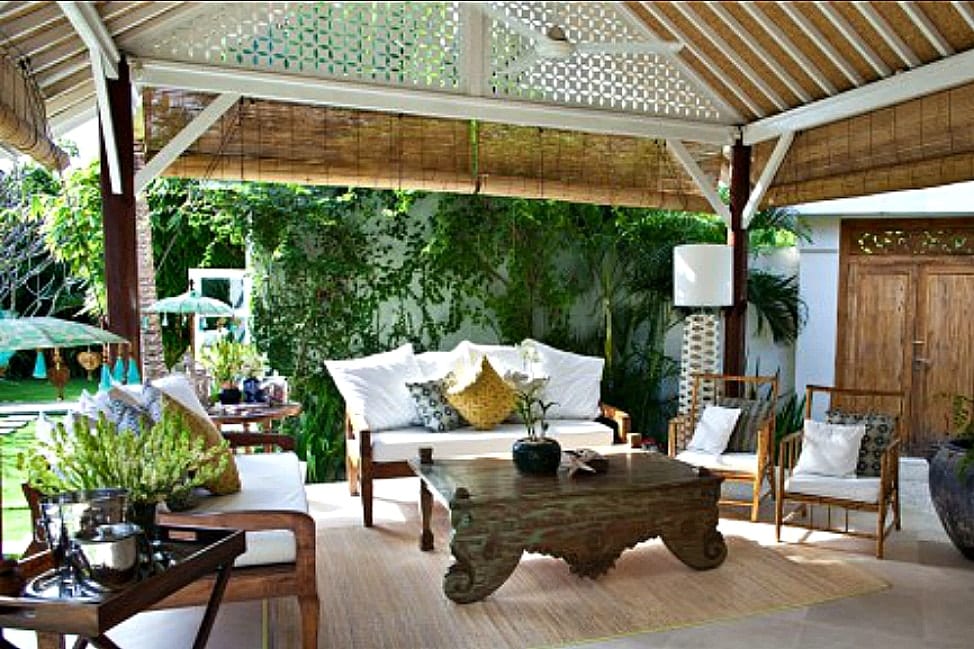 The first step after getting settled in was a very casual orientation where we made introductions and met sisters Chelsea and Jade, the Surf Goddesses in charge. They explained that nothing on the schedule was required or mandatory, so we were free to just have a good time however we saw fit.

On the schedule for our first full day:

Can someone say doozy?

At dinner, all the gals chattered excitedly, asking the requisite questions, most importantly, “Have you ever surfed before?” Most were from Australia, with a smattering of USA and of course Pam from Holland, and just about everyone was a true surf novice. 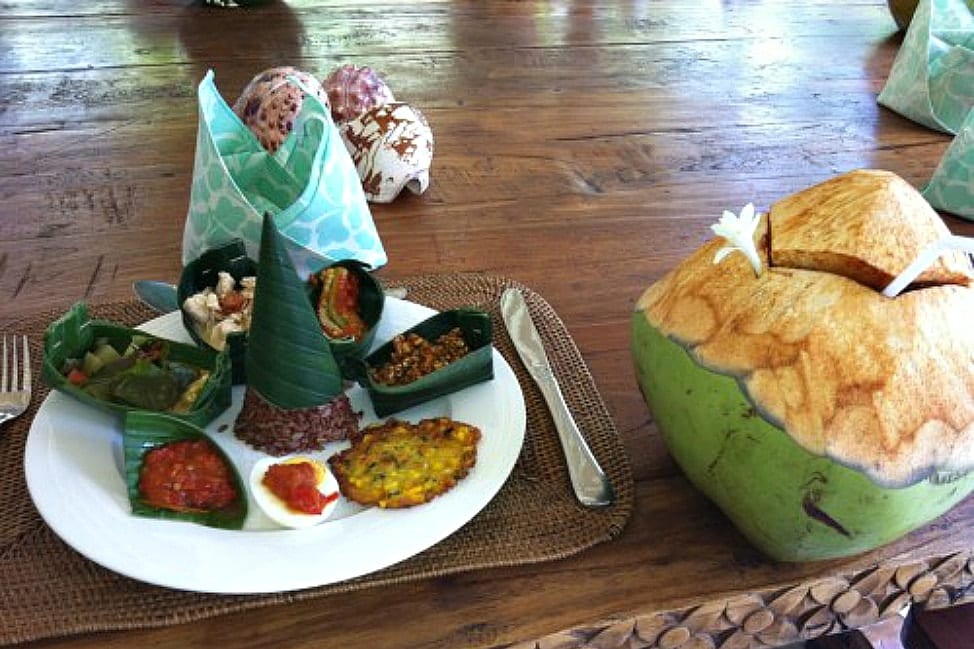 The highlight of the evening, aside from meeting all the gals, was getting our first taste of chef Joyce’s tasty cooking. Joyce is Surf Goddess’ chef extraordinaire, and she truly is an artist, not just with food, but with the way she coordinates the table settings. Each meal was filled with oohs and aahs from all the Surf Goddesses. Martha Stewart would be suitably impressed. More about that next time.