Early in the day, I rolled down a big hill in a plastic ball filled with warm water. Say what?! Check out my ZORB adventure and video from inside the ball here on Flying Kiwi’s blog. 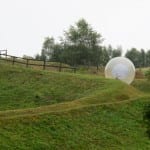 Later that evening after recovering from what felt like being flushed down the loo, a group of us Flying Kiwis went to Tamaki Maori Village for dinner and a cultural experience. The Maori are New Zealand’s indigenous Polynesian people who came to Aotearoa, the Land of the Long White Cloud, hundreds of years before European settlers arrived.

The tour/dinner/show combination was a bit pricey, but just five minutes into the half hour bus ride, I was convinced my money was well spent. Every single person on our bus was in tears laughing at our Maori driver, who was teaching us the meaning of Kia Ora in 59 languages. He managed to gently make fun of every nationality on the bus and our respective accents.

Anybody on the bus from the USA? He asked. I waved and he smiled. Kia ora is like hey y’all or how YOU doin’? Who knew Joey Tribbiani reached all the way to New Zealand!? 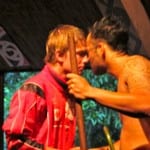 On the way to the village, the funny bus driver chose one of the youngest Flying Kiwis to serve as chief of our tribe. Till from Germany was warned in advance not to laugh when the Maori warrior came out of the village and stuck his tongue right in his face. It was really tough not to, not because their culture is funny, but because in ours it’s unusual to see grown men screaming, making bug eyed faces and sticking their tongues out emphatically. 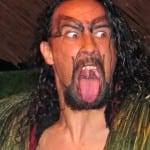 If the bus ride was the best part,the hangi food was a very close second. The traditional hangi method of cooking involves wrapping meat and veggies up and baking them in the ground, then bringing them out several hours later for an all-you-can-eat buffet. YUM!

Up next… Taupo & Preparing For The Journey To Mt. Doom