After meandering casually around the top of the Sky Tower earlier that morning, it’s only fitting that my last night in Auckland was at SKYCITY’s luxurious Grand Hotel. As with every aspect of my visit to Auckland, Sky City was as centrally located as you’d want, plus it was literally the next block over from the Auckland City Hotel where I spent the rest of my trip. 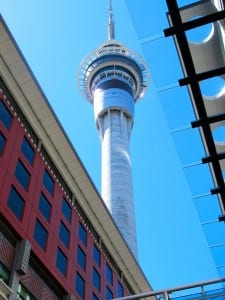 My room was on the 9th floor and featured all the expected amenities plus a beautiful view of the Sky Tower (which I TOTALLY own now) and the city. 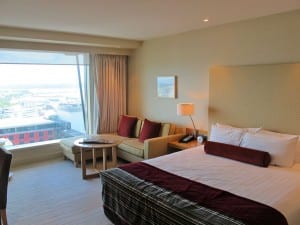 Since I was only at Sky City for one night, I didn’t get to check out the casino… though knowing my love of blackjack and the fact that I am now sans income, it’s probably for the best. I did however get to have a gorgeous dinner at the super swanky dine by Peter Gordon restaurant on the ground floor of the hotel. And to make the meal even more special, Facebook brought long lost sorority sister Lauren back into my life. 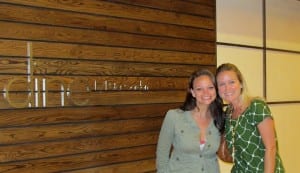 Lauren met a handsome Kiwi back home and is now living in Auckland. It’s been at least six years since she and I had lunch at The Delta, and it truly was a treat catching up with her as functional, independent adults who for once weren’t dressed in either orange & blue Gator gear or Barbie costumes. We discovered that we had very similar relationship experiences in college, though we’d never chatted about them before because, well, I guess you don’t really know what’s up until you’re past it, you know? It was such a breath of fresh air to be able to dish with someone who went through the same things though! 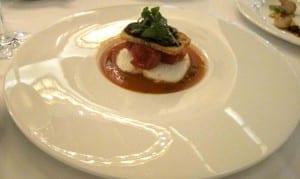 Speaking of dish… We took absolutely forever to order from the menu. Everything just looked so yummy and we were chatting up a storm! Eventually we shared appetizers of pan-seared Nelson scallops with a goats’ cheese stuffed courgette flower, leek fondue, caramelised chorizo and mustard dressing and Clevedon Valley buffalo mozzarella with roasted strawberry tomatoes, olive crostini, crunchy quinoa and Gazpacho dressing. 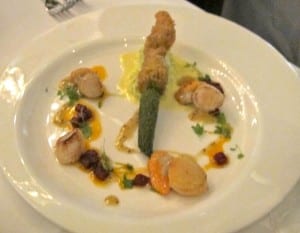 There were several amuse-bouches treats from the chef throughout the meal, including a lavender granitas, and while it was interesting we both agreed we prefer our lavender in the bath, not on the plate. My bouche was certainly amused!

For the main course, we both chose tortellini of ricotta and mushrooms with buttered asparagus, watercress and porcini cream which was as nice as it sounds. For dessert, we shared the peanut butter parfait with coconut sorbet, lemongrass jelly, toasted banana marshmallows, curry crumble and passion fruit – I know, a random mix of flavors but it worked! – and the chocolate biscuit sampler.

After dinner, I went up to my room with its gorgeous sparkly view of Auckland and hopped in the oversized tub for a bubble bath. It seemed like a good idea considering the next seven nights would be spent camping in the wilderness with Flying Kiwi.

Thanks to the folks at the Grand Hotel and dine by Peter Gordon for a wonderful last night in Auckland!

Up next… Kicking it off with Flying Kiwi!

2 thoughts on “Where to Stay | Auckland”