How does an outdoorsy New York lumberjack / fisherman without a passport or a Twitter account end up with a nomadic, blogging, tech-addicted, globetrotting publicist?

It’s a love story only God could’ve dreamed up.

I left Florida immediately after college and eventually ended up in New York. Rick left New York after graduation to move to Florida, where he became friends with my brother and his circle. Soon, he was living in one of my parents’ rental properties down the street from their house out in the country. I had no idea he existed of course, because I was in New York City suffering through Match.com and junior investment bankers.

My brother gifted my parents with a new concrete walkway for Christmas, so while I was home from New York, he recruited a handful of friends to demolish the old walkway. As I stood on the front porch of my parents’ house, my future husband drove up on a muddy tractor.

I didn’t for one moment think, “Ah, there he is. I’m going to marry that man on the tractor.”

It’s more likely that I stood there in my pajamas with one hand on my hip bossing everyone around. In my mind, my brother’s friends were just a homogenous group of hooligans, and since Rick was too shy to say hi, I have no recollection of this first meeting.

But Rick says he was sold. He had heard tales of Alex’s “hot older sister” from the other boys in the group, and he says he was not disappointed. Glad my jammies made a lasting impression!

I’d just returned to Florida after a couple of months on the road in Hawaii & Morocco. Having traveled for the better part of two years, I was exhausted and very happy to be home for Christmas. I wasn’t sure what my next steps would be, but I was considering trying out non-nomadic living for a while.

Dating was not on my radar. 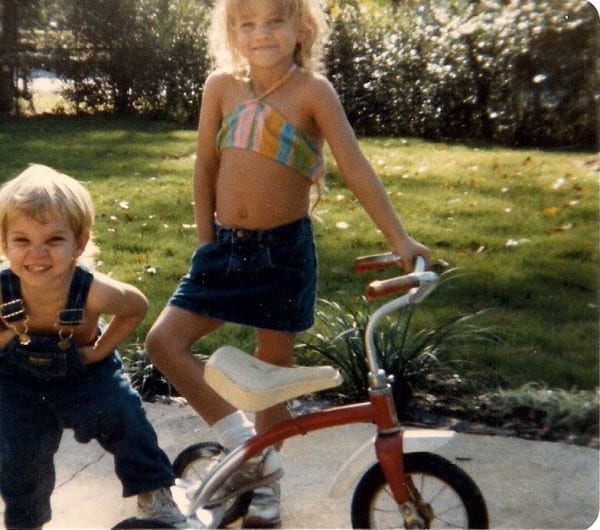 Little brother & I in the front yard at the Hilltop House.
25 years later Rick & I smooched for the first time in this same spot.

My brother was living in one of my parents’ rental properties in Jacksonville, the Hilltop House, which also happens to be the first house I ever lived in. It’s the site of most of my early memories, including my Rainbow Brite bedroom and the exact moment I learned to read on the living room floor. It’s also the place where Alex had his little fire accident earlier in the year.

The Orth family left the Hilltop House sometime in the late 80s, and a few decades later, future fiancé moved in. 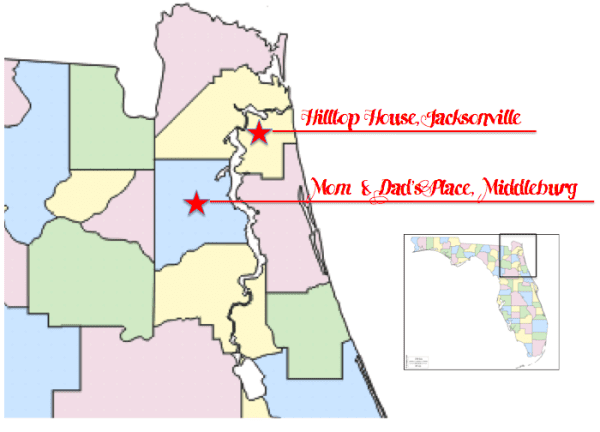 A few days before Christmas 2012, my brother’s band played a special hometown show in Middleburg, so all his friends and roommates came out to support.

“Rick? Hodgie’s roommate? Has he always been super hot?”

Mom joins in. “Are you guys talking about Rick? Yeah, he is hot.”

Consensus. Hmmm, that was unusual.

I’d just found out Rick was from New York, so I marched over and started chatting him up and asking a million questions. I probably scared him to death.

He said he wasn’t going home for the holidays… and I couldn’t let this hot hottie spend Christmas all alone, could I? I invited him to spend a few days out at Mom & Dad’s place. I’m so thoughtful like that.

Alex showed up with a handful of friends on Christmas Eve, including Rick. We played Apples to Apples, watched movies, had safe bonfires, baked cookies and introduced our guests to the Orth family tradition of wrapping junk from around the house and gifting it to people on Christmas morning. Rick fit right in with my crazy family, never missing a beat or running for the hills.

A few weeks passed by and I kept finding excuses to drive the hour+ from Middleburg to visit the Hilltop House, something I never, ever, ever did before. Every weekend, we’d skateboard late at night, have bonfires out back and sing pop songs in the kitchen with the ragtag group of roommates. Rick was always very reserved though, so I wasn’t sure if the attraction was mutual or if I was just being a stalker.

Eventually, after many conversations, we figured out he liked me and I liked him, right about the time we smooched in my old/his current driveway.

Despite having been single for 100 years when we met, and fully expecting to continue being single for 100 more, we’ve been nearly inseparable since that night.

Marriage was hardly on the table at first. For so many reasons, we just weren’t ready. We knew we wanted to be together, but we fought commitment pretty hard. We had the requisite freak-out breakup about a year in, and it was terrible. Ultimately the separation made it clear that God had a bigger plan to bless us through marriage.

As usual, God’s plans are bigger and better than my own.

It’s funny how much we’ve both changed since we first officially met. As much as we both needed to grow, I’m actually surprised that it only took us two years to get to where we are now.

On paper, we’re SO different! I thought I always wanted to end up with the male version of me, I now see how disastrous that would’ve been. Rick is everything I’m not – he’s mellow & relaxed, sweet & soft-hearted, and in no way attached to the Internet, his calendar, passport or social media. We usually look like we’re going to separate events when we meet up – I’m in a dress & heels, he’s in jeans & a T-shirt. He’s such a good balance for the constant whirlwind of spreadsheets and itineraries that is my life. He keeps me grounded.

We are similar in one specific way that I really cherish – we’re the same kind of weird. I finally found someone I can dork out with. Rick never judges me for being a goofball, and I cherish that freedom so much. He makes me laugh ’til I cry and he thinks I’m cute on TV in my fancy red carpet clothes or at home dancing a jig to Britney Spears in my Slytherin pajamas & a wig. Don’t ask! 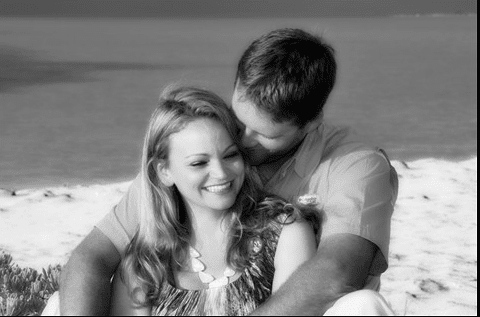 The only thing that really ever mattered to me is that we both share the same faith. Looking back, now I see it’s the main reason it never worked out with anyone else. God was writing our story all along. While I was mooning over exotic accents around the world, Rick was back home doing the same thing. All those mistakes & missteps eventually lead us to each other, in my front yard. I think we both know how blessed we are to be together moving forward on the path God has designed just for us.

Now you know how it all went down. In hindsight, it makes so much sense, but it was no easy journey getting to this point. For now, I’m reveling in God’s sovereignty and enjoying our engagement… and the wedding planning process, wooooo-hoooo! 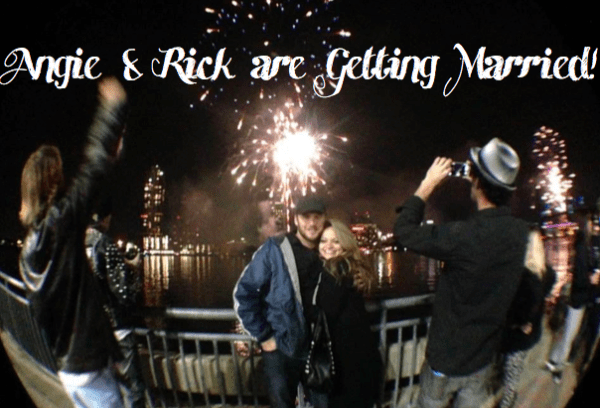 I love “how we met” stories now. It’s always fun to see how other folks found each other. So tell me, if you’re paired off, how’d you meet your significant other?