When I was in college, I road tripped from San Francisco to San Diego with my grandma one spring break. On our second day, we explored San Francisco Bay and Fisherman’s Wharf only to return to our rental SUV to find the window smashed and much of our stuff gone. 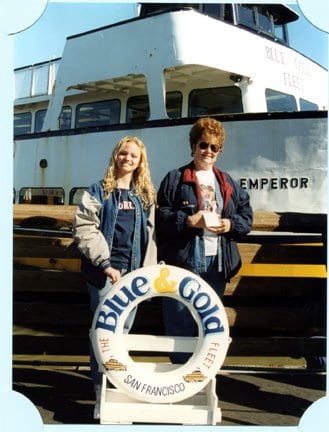 Shame on me for being a naive teen and thinking I could leave my wallet, school books and handmade-by-Great-Grandma baby blanket in my backpack stuffed under the front seat. It was the biggest DUH moment of my life and one of those instances when a snap decision changes everything.

Amazingly, the SFPD apprehended the thief while he was sorting through our goodies at a diner the next day, and we got almost everything back…  except the two most important things: my blanket and my social security card.

While the immediate worst part of the whole ordeal was having my very special, very sentimental blanket stolen, that trauma was only the beginning of what I would endure thanks to our sneaky thief.

Two years later, I was preparing to leave on my summer study abroad trip to Paris. I applied for an emergency-only credit card – just a $500 limit – from my local bank, and was promptly and vehemently denied. Apparently, my credit report showed more than $1,300 in unpaid cell phone bills from Verizon, which was pretty nuts considering I didn’t even own a cell phone at the time. There were also dozens of attempts to open accounts in my name at other cell service providers. I pulled up a credit report as soon as I got home and found that as far as the bank was concerned, I’d been living in Oakland, Calif., since 2001 and getting up to all sorts of illegal shenanigans. In reality of course, I’d just been minding my own business in Florida oblivious to the fact that our San Francisco thief was still wreaking havoc on my life.

It took more than 6 months of admin, phone calls and mailing police reports & forms to the credit bureaus to clear up and prove that I hadn’t been opening accounts all over California. It was a miserable experience and one I never want you to have to go through! Check out the following identity theft prevention tips from TrustedID (my comments in parenthesis):

A few other tips from me:

Identity theft may look hilarious when depicted by the fabulous Melissa McCarthy, but in real life, it’s not half as much fun. Have you ever had to deal with it while traveling?

Check out my story on identity theft in Seventeen. (Page 2) And forgive my ridiculous hair. We’d just left the 90s, folks!