No matter how far away my travels take me, I’ll never forget my roots.

While I love visiting new places (obviously!) and meeting new people, one of my guilty conversational pleasures while traveling is telling those new folks all about where I come from. And no, I’m not talking about New York City, though that’s where I spent the last few years, or Atlanta, where I got my start in public relations right after college.

My real hometown, where the majority of my family and all my possessions live, is on the Florida First Coast, so named because the town of St. Augustine was founded by the Spanish in 1565, making it North America’s first permanent European settlement.

Over the past 13+ months, I’ve regaled Aussies and Kiwis and Kenyans with tales of my upbringing in the region, and in doing so, have ignited some interest in a guided tour. Whether that larger effort ever takes places remains to be seen, but just in case a busload of foreign friends ever show up, I started thinking about what the itinerary might look like. So far, I’ve only covered a few days in my hometown and surrounding areas, and I thought I’d share it with y’all. (See what I did there? I’m still Southern!) 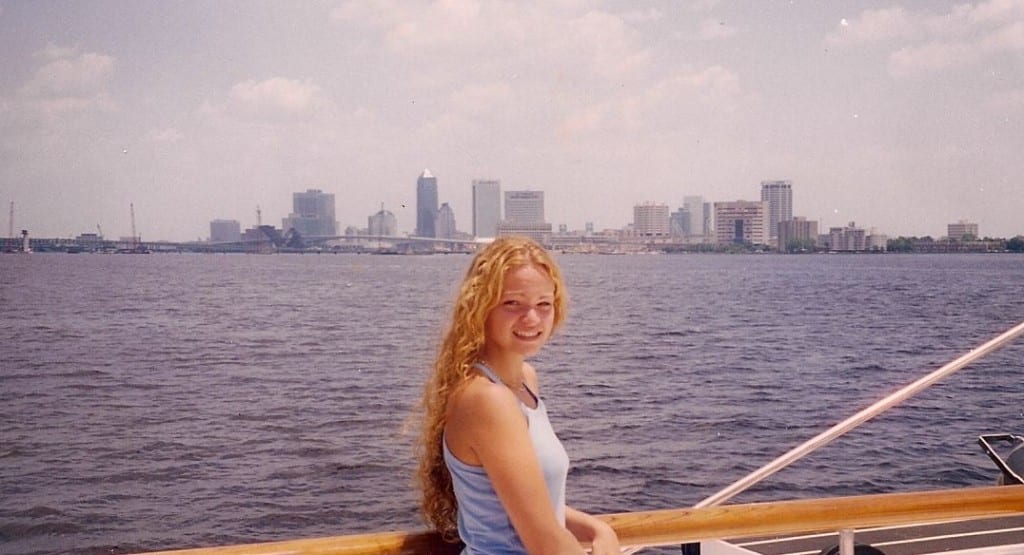 16-year-old Angie welcomes you to Jacksonville

Want to come along?

My guests would land at JAX, a small but modern international airport which seems to get better with every trip back. Free WiFi, multiple Starbucks and the most consistently friendly TSA agents I’ve ever encountered in my travels make homecoming pleasant each and every time.

The tour’s first stop would be Atlanta-based fast food restaurant, Chick-Fil-A, (unless it’s Sunday – when Chick-Fil-A is closed) for nuggets and unbelievable waffle fries, followed by a day at the beach. Jacksonville may not have clear turquoise water like The Bahamas, but our Atlantic-facing beaches are long, wide and sandy, and usually full of tanned Floridians playing football. Real football, not soccer! I come from a long line of surfers and beach bums, so it’s no surprise the beach is the first place I’d take any foreign visitor. Unfortunately for the Aussies, South Africans and anyone else accustomed to big waves, it’s a rare treat (usually accompanied by hurricane or tropical storm) to have decent surf in North Florida, but it’s still fun to paddle around the affectionately nicknamed Lake Atlantic. 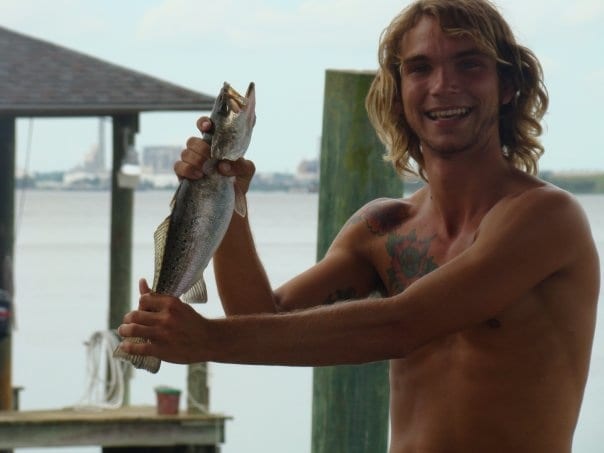 Your fishing guide, my brother Alex

The North Florida area has a fantastic fishing scene, in both fresh and salt water. First, we’d hire a charter and head offshore to catch wahoo & kingfish. Next, we’d hop in my Dad’s little boat and cruise around his top secret fishing holes on the St. Johns River in search of red bass, trout and maybe the occasional flounder. I will probably have to blindfold my guests and disable any GPS devices so they can’t figure out where the spot is.

In the South, we take our family secrets very seriously. 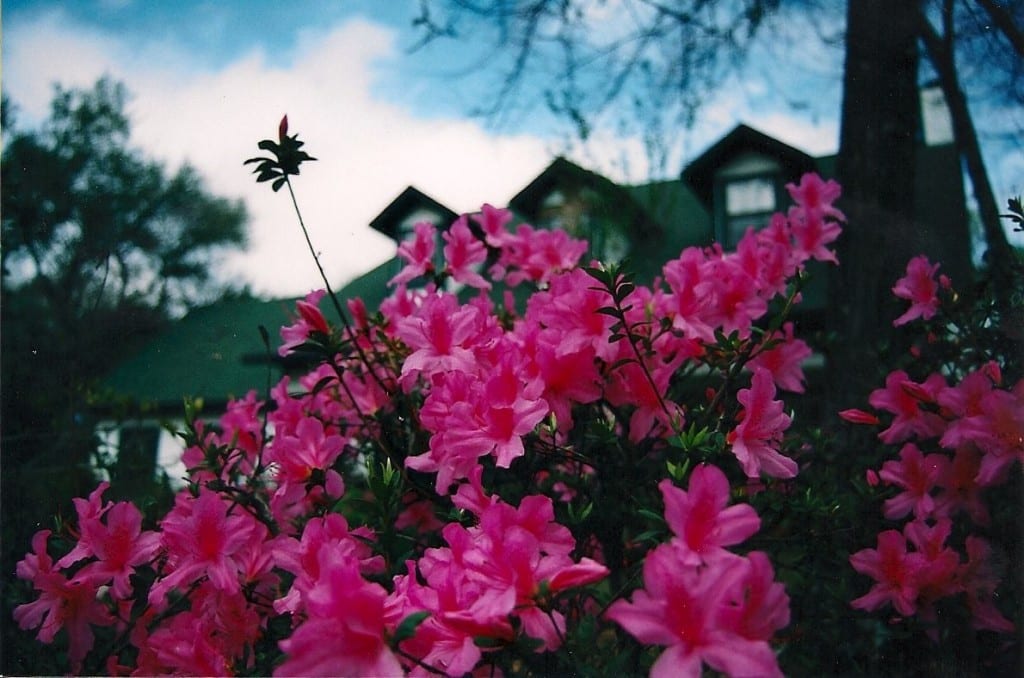 Later, back at Mom & Dad’s house in Middleburg, a semi-rural but rapidly expanding suburb-of-a-suburb, Dad will filet and Mom will cook our fresh catch with Papa Orth’s famous and you guessed it, secret, beer batter fish recipe.  We will probably grill a few other types of meat, too, because that’s how we roll. Expect ribs, chicken, steaks and drinks (probably sweet tea) served in red Solo cups. We’ll play horseshoes and later have a bonfire in the backyard — guaranteed not to be started by my little brother. 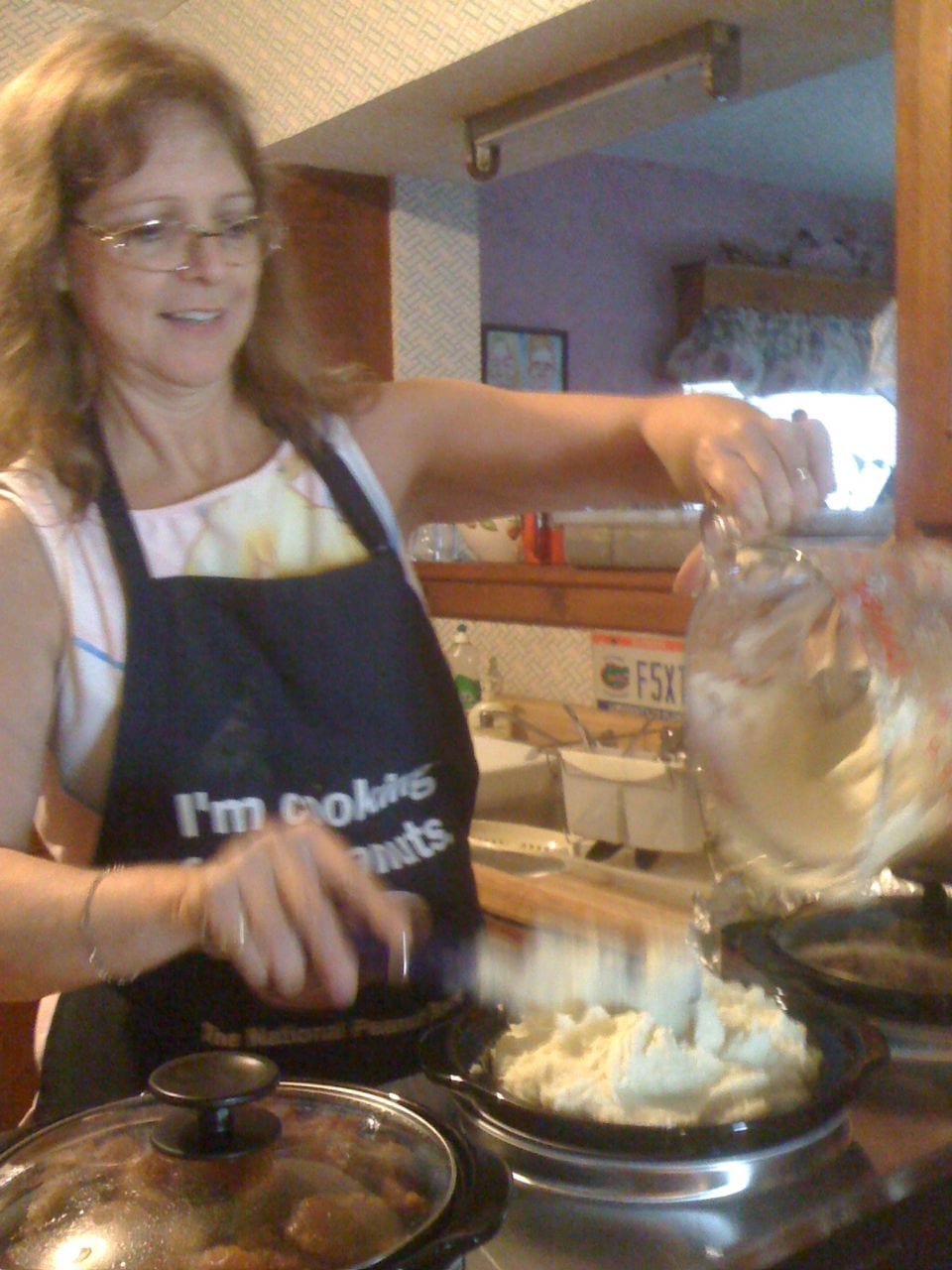 We’ll sleep at my parents’ big country-style house, play a little Just Dance for Wii and maybe jam in the music room. Folks will fall asleep randomly on couches and beds and air mattresses strewn about, like they always do. We’ve always got a house full of friends. 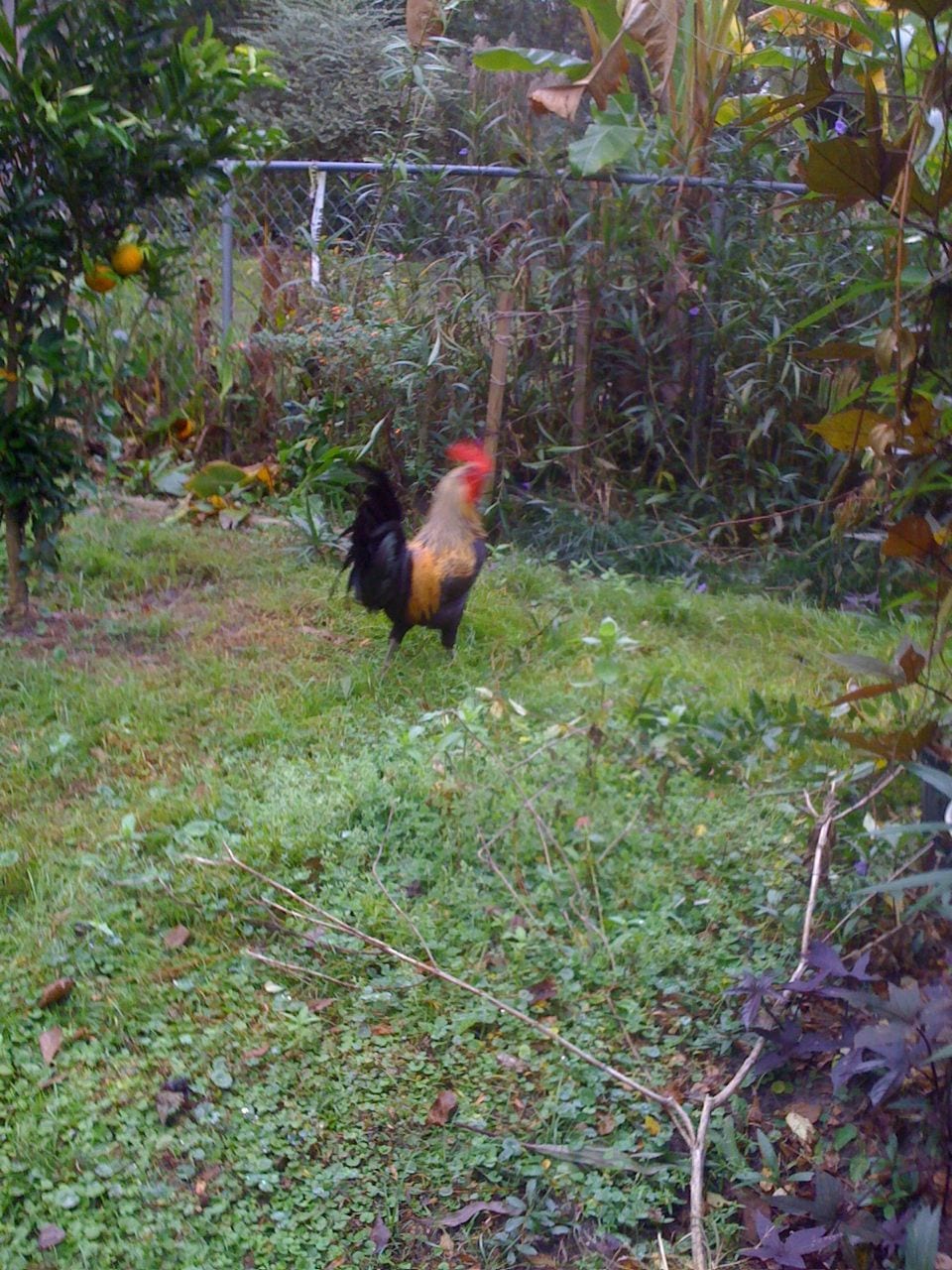 After a quality night of sleep, the random chickens that belong to I-don’t-know-who will cockadoodledoo-us all awake and it’s a good thing – we have a lot to see in a limited time!

First stop: shopping in Middleburg. This ain’t New York City, so I’ll remind my guests not to get any ideas about fancy designers and spending heaps of cash.

We’re shopping for the anthropological experience – not the goods.

The first stop is Middleburg’s own Super Walmart. I don’t want to editorialize too much on what you might see here, but if we were doing a scavenger hunt, I’d put these items on the list:

…I could go on. It’ll be a shopping trip to remember. Bring a camera.

If all the items aren’t checked off by the time we’ve gotten pedicures, eye exams, chicken gizzards, a shotgun, a flat screen TV and cat food from Super Walmart, we can head up the road, preferably in the back of a pickup truck, to the local Winn Dixie, a regional supermarket chain. We could go to the Publix, built a few years after we relocated from the big city of Jacksonville out to the village of Middleburg, but it’s just too fancy and expensive, dangit. Plus, Winn Dixie offers more opportunity to interact with natives. 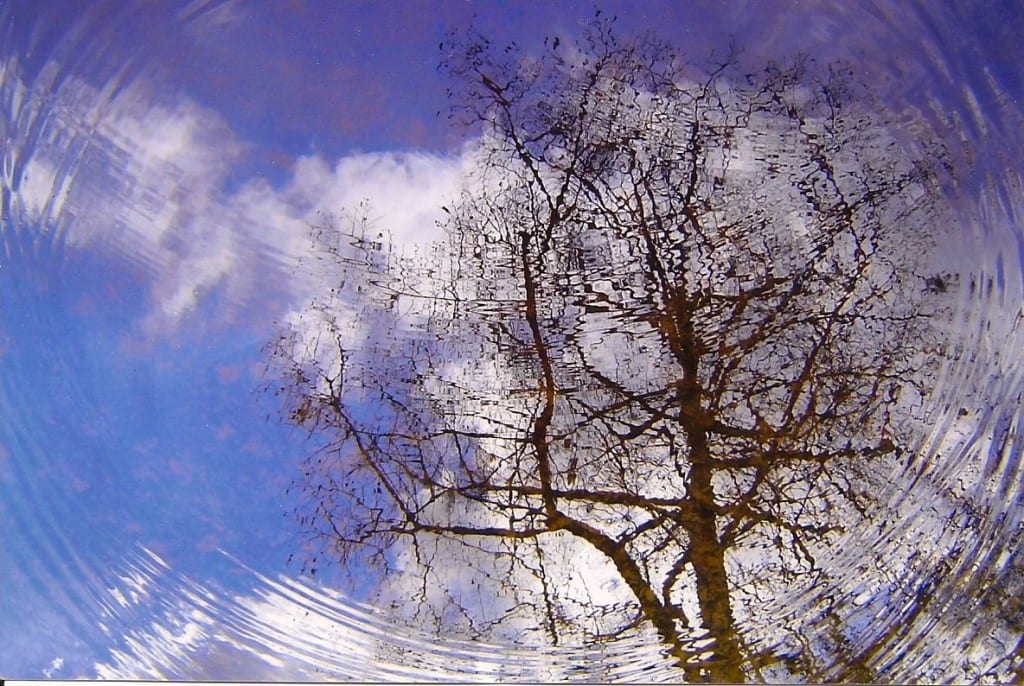 A dip in icy Black Creek

We’ll be pretty exhausted after hitting up the popular shopping hubs, so we’ll grab a few baggies of boiled peanuts from that guy on the side of the road who sells them out of his van, then we’ll head home for a dip in Black Creek, an iced-tea colored stream that snakes quietly through town and eventually empties into the St. Johns River.

Sure, there are poisonous snakes and alligators in Black Creek – it is Florida, after all – but you probably don’t have anything to worry about. You’re more likely to get injured jumping out of a tree into the creek. Hope your travel insurance is up to date.

For supper, we’ll head to the only place in town with anything remotely resemblind a “scene” – Prevatt’s Bar & Grill. Formerly known as Baxter’s, and before that, Ronnie’s, Prevatt’s is the place to go for wings, karaoke, country music and some choice people watching.  I’ll order a heap of food from the menu, including fried pickles, gator tail and corn nuggets, and maybe we can check off one of the scariest items on my bucket list – singing a hip-hop jam at Prevatt’s karaoke night. I haven’t worked up the courage to do it yet, but maybe if all my friends were there to cheer me on…

The night won’t end with supper, as we have a time-honored southern tradition to uphold – Friday night high school football! My alma mater, Middleburg High School, is right down the road, so we’ll pull into the parking lot made up of 75% pickup trucks and pay our $7 to cheer, “RED! WHITE! Fight, Fight, Fight!” 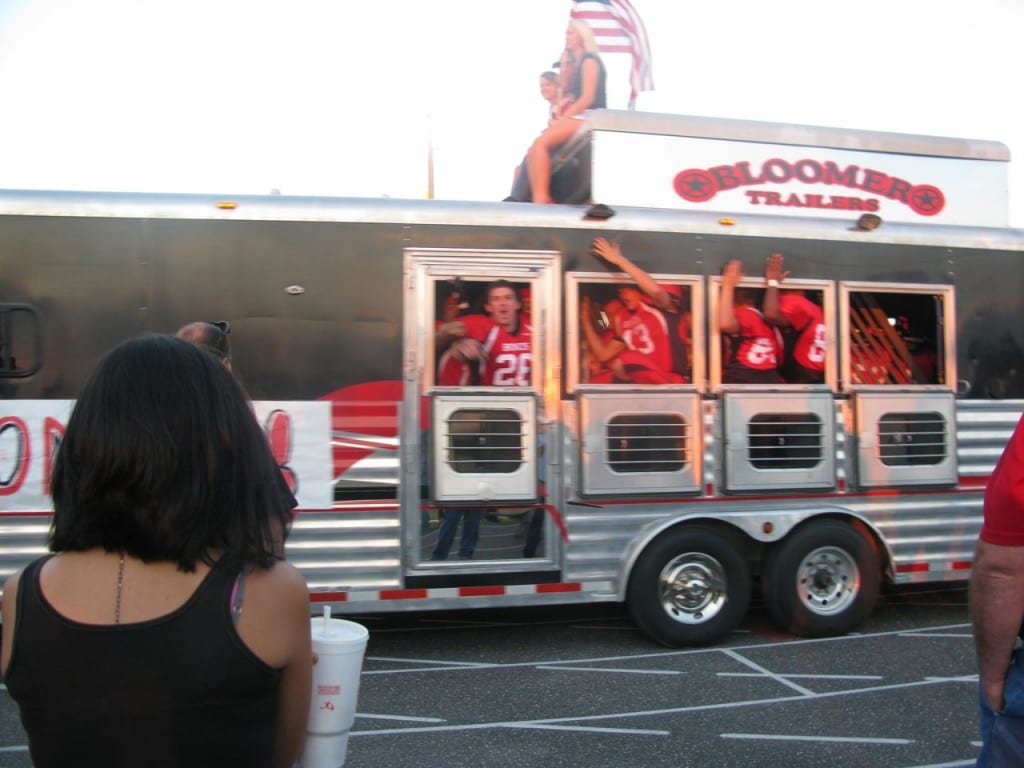 The team enters the field ceremoniously via horse trailer – we are, after all, the Middleburg Broncos.

The crowd will roar, country music will play and the cheerleaders will shake their sparkly black, red and white pompoms while I critique their toe-touches. (I was once one of them, so I think it only fair to note when their movements are not perfectly timed.)

There will be more eating – what’s better than concession stand food! – and cheering, laughing and more people-watching….

…. and that’s just all the time we have for this tour.

It’ll never compare to New York City or the big wide world, but what place does?

Whatever it is, I love it. I miss it. And it will always be home.

5 thoughts on “The Place That Made Me”