The Valley of the Kings in Luxor, Egypt, is a Mecca of sorts for the would-be archaeologist, and being a would-be archaeologist, I’d been intrigued by tales of curses and freak occurrences at the site since I was wee. After the Great Pyramids of Giza, the Valley of the Kings was the 2nd most often conjured location used in my 8-year-old adventure fantasies about growing up to be the girl Indiana Jones.

Sadly, the romantic and aggrandized Cave of Wonders version of Valley of the Kings in my head was nothing like real life.

With our entrance ticket, we were able to visit three tombs, all of which were pretty similar and gutted of treasures. And even worse than the site being unremarkable, you can’t take any photographs inside or outside the tombs – none at all – on pain of death. (At least I think that’s what the sign said.) Maybe the mummified ghost of King Tut and his viziers had something to do with the very strictly enforced no-pictures policy. Maybe not. Either way, overall I was disappointed.

There was one bright memory from the Valley of the Kings experience – my cute Aussie tour guide. He wasn’t the real tour guide of course. Haytham the On the Go Egyptologist did a great job of telling the real story of King Tut, his tomb (which for the record, costs quite a bit extra to visit on top of the site ticket, though all its famous treasures are stored at the Egyptian Museum in Cairo) and his interred neighbors. Once Haytham was done dishing, Aussie Hottie and I wandered around and he interpreted the Egyptian hieroglyphs on the tomb walls.

According to his interpretations, the ancient Egyptians invented streaking, hot tubs and cow mattresses.

I just love a man who can make me laugh… 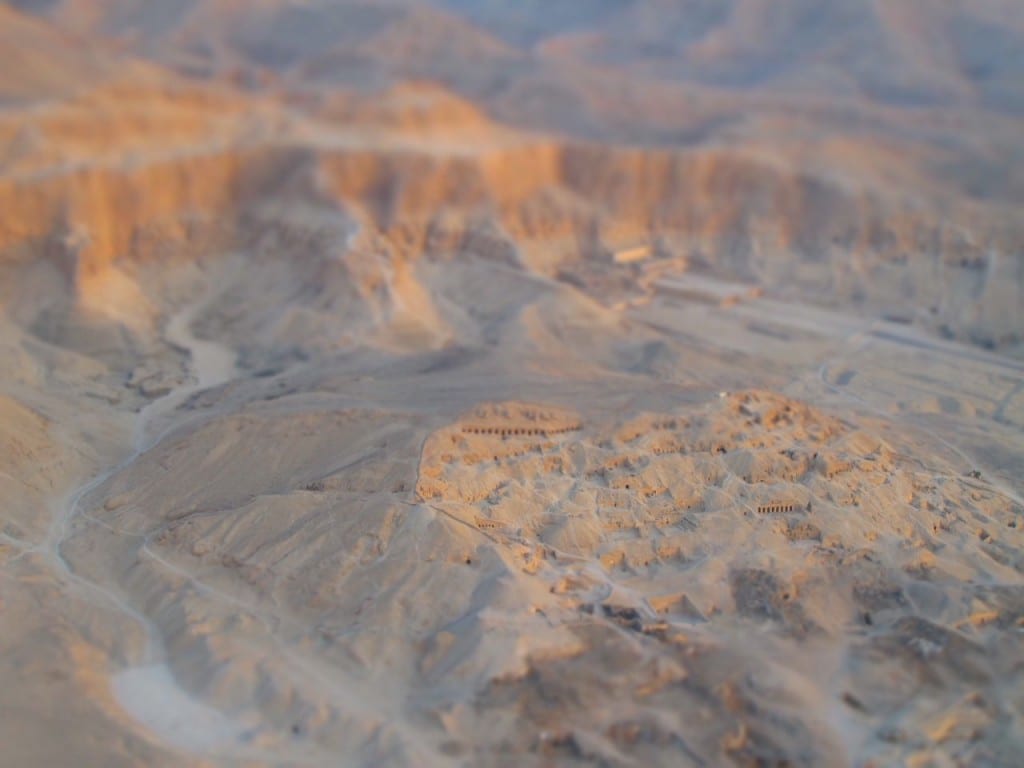 Valley of the Kings from above

Obviously the curse of King Tut prevented me from taking any surreptitious photos (and I suppose, it keeps the colors on the tombs of the walls vivid for thousands of years) so my only Kodak moments from that part of the day are the ones from the balloon above. 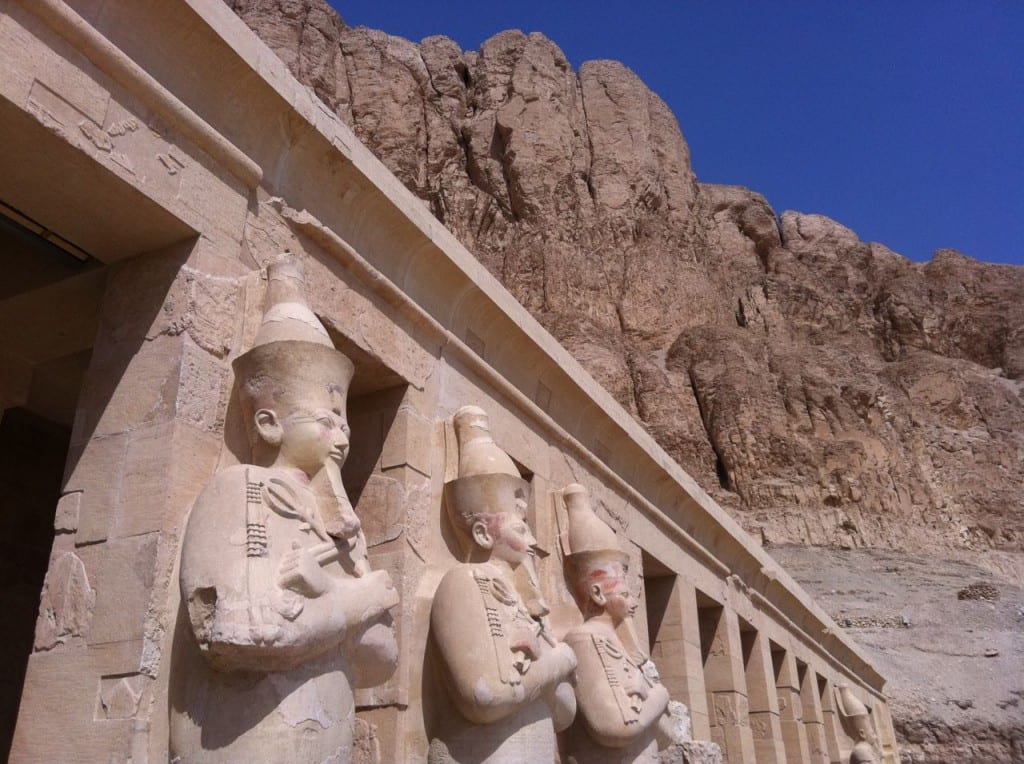 Immediately after the underwhelming Valley of the Kings, we made our way to a site my little sister Rachel had just studied in her AP Art History class – Queen Hatshepsut’s place. While she seethed with jealousy from an uncomfy public school desk, I sent picture texts like this: 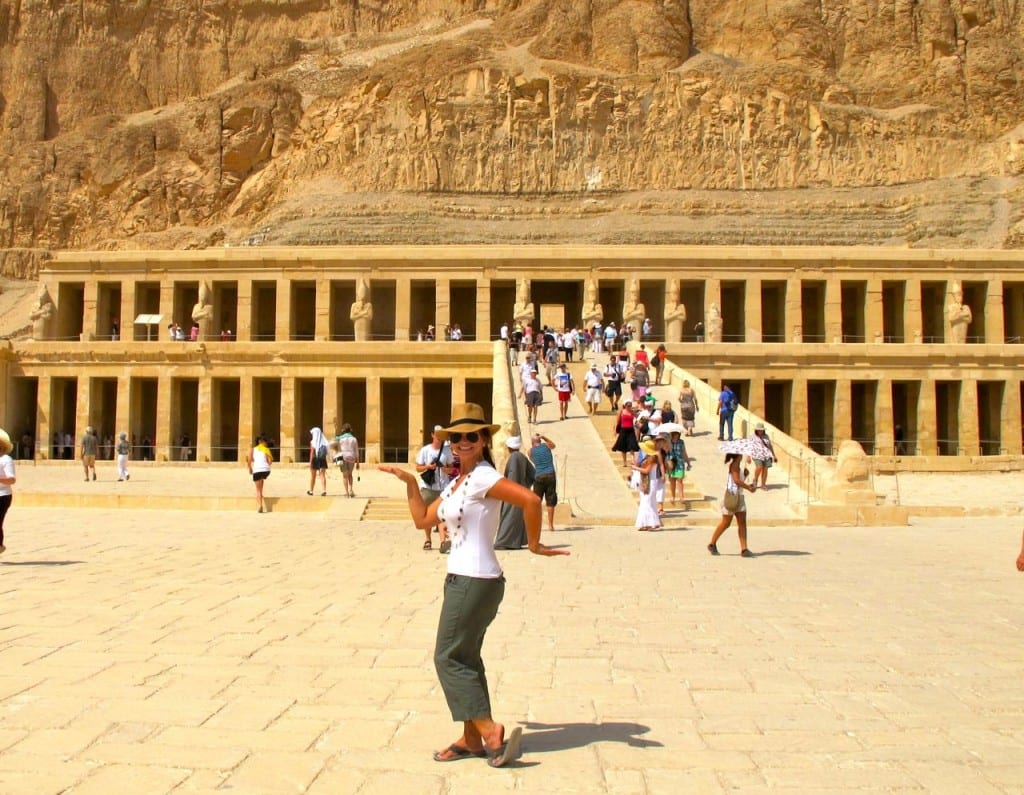 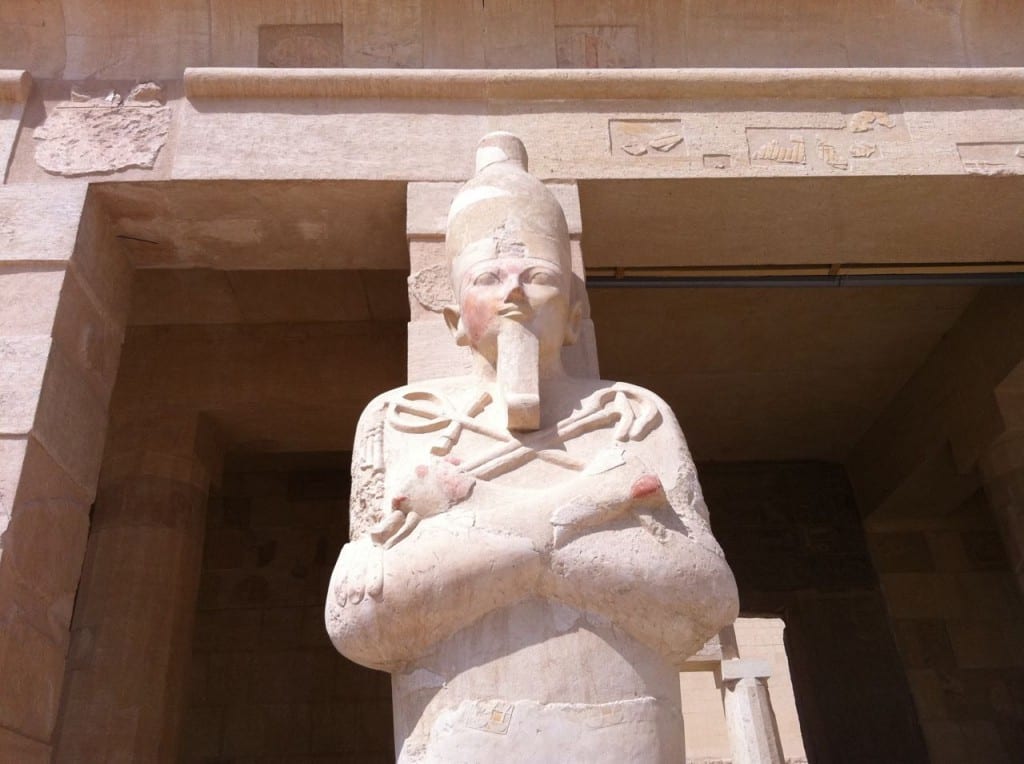 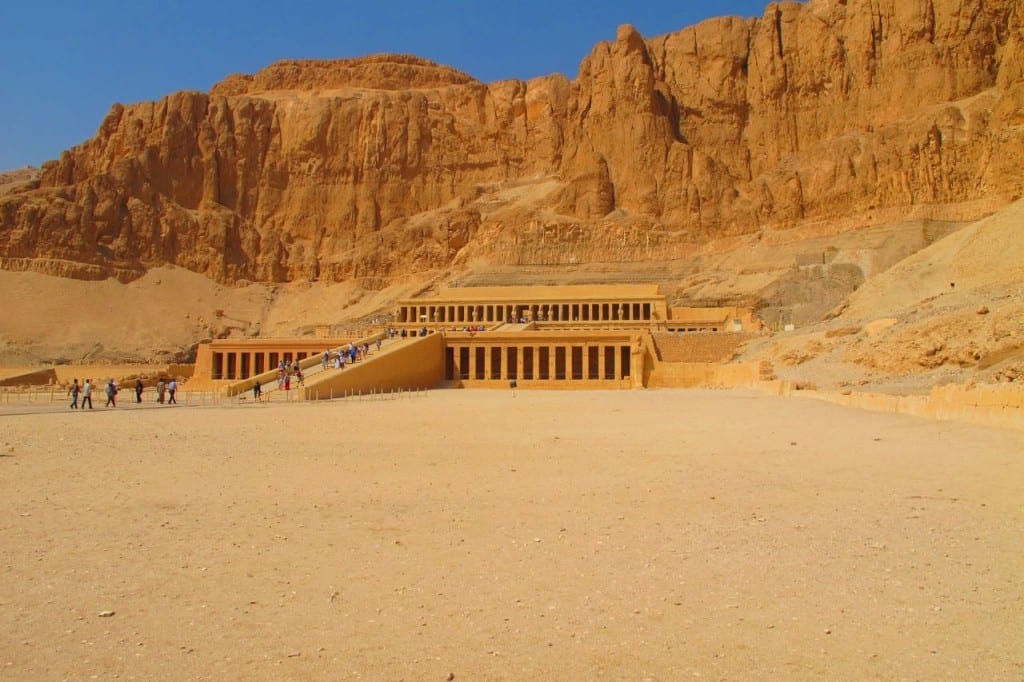 What my sister already knew was that Queen Hatshepsut was one of Egypt’s most successful pharaohs. She hired famous architect Ineni to construct her tomb, and once he was finished with the masterpiece, she had him killed so he wouldn’t build any more awesome structures for anyone else. Brutal. 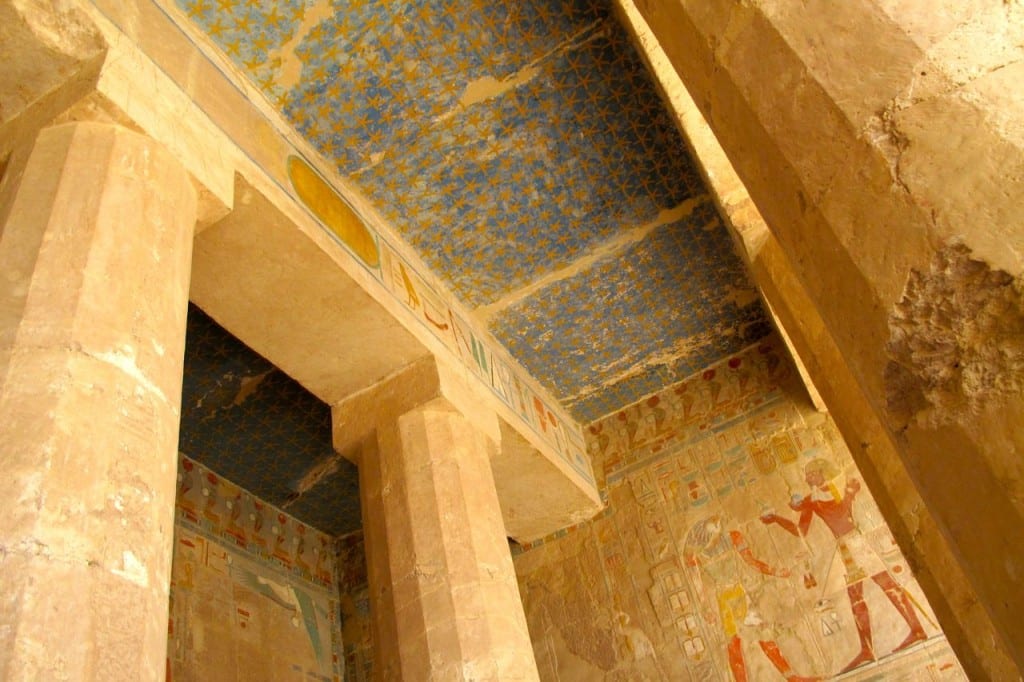 Queen Hatshepsut reigned for about 22 years. One of her accomplishments was the introduction of the roots of 31 myrrh trees, the first foreign horticulture transplant, but even more notably, she is known as one of the most prolific builders in all of ancient Egypt.

So many statues were carved during her reign that almost every major museum in the world has at least a piece or two. 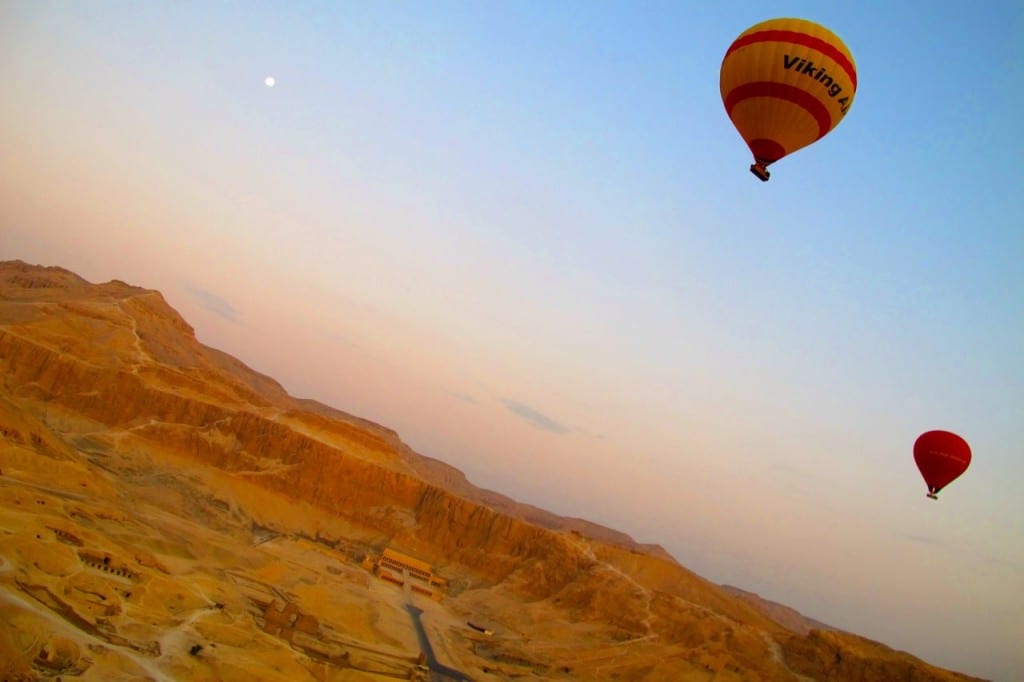 Queen Hatshepsut’s place was the backdrop for one of the craziest scenes of my whole trip to Egypt. Hassan the Hustler singled out our group as soon as we arrived at the site and he shouted, “Shakira, hello, Shakira! You are so beautiful, Shakira!” until I turned to look in his direction. When I did, he grabbed my arm and pressed a blue scarab beetle bead into the palm of my hand.

I was so surprised that I didn’t register what was going on until it was too late – I had accepted his gift and now he expected me to stop in his shop and purchase his wares. He followed me from the entrance all the way to the tram that drives tourists out to the tomb, grabbing at me and begging me to come to his shop. I felt bad… it’s not normal for me, or any of you I’d assume, to ignore someone, especially knowing he’s just trying to make a buck. It hasn’t been easy on tourism in Egypt in the past 12 months! 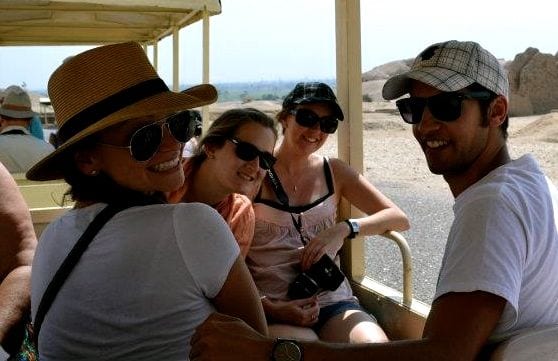 Hassan kept shouting at me even after we’d boarded the tram and demanded I come back once we returned from casa de Queen Hatshepsut. I was scared he was going to get aggressive and our guide even said that accepting that beetle was a really bad idea.

So my new friends helped me transform my look in the hopes of tricking Hassan.

I traded sunglasses, my hat and my scarf with the gals, put my hair in a ponytail, bolstered myself with two strong Australian fellas on either side, and made a beeline for the exit. We had to go through at least 200 yards worth of market stalls, and while I kept my head down, the guys watched for Hassan. It was no use though, because ultimately Hassan spotted us and came running with one thing on his mind – Shakira!

We kicked our speed-walking into high gear and the guys had to physically block Hassan from grabbing me as we made our way to the exit. He was not a happy camper. I’m pretty sure I heard him yell, “I JUST WANT TO TALK TO HER!” as he tried to get me. Thanks to the Aussies, I escaped unscathed.

I guess even if Valley of the Kings didn’t pack the adventure I expected, Queen Hatshepsut’s tomb and Hassan the Hustler were plenty of excitement for the day. (And it was only noon!)